When I asked Halifax Thunderbirds player, Kyle Jackson, what we can expect when experiencing a Thunderbirds game for the first time, his response was “an absolute party!”… and who doesn’t love a good ol’ East Coast party?

Get ready to join in the fiesta with the Halifax Thunderbirds Lacrosse Team as they kick off their inaugural season at the Scotiabank Centre on Saturday, December 7th against the New York Riptide. This historic match will be the first-ever National Lacrosse League (NLL) game in our city. Halifax’s newest professional sports team will be playing in the 13-team NLL and will be introducing their fans to high-level international action as they get ready to host teams from across Canada and the United States. Our very own hometown Thunderbirds will play at the Scotiabank Centre with regular-season games scheduled from December to April. Scroll down for your chance to win two tickets to the Thunderbirds game on March 8th!

The Halifax Thunderbirds (relocated from Rochester, NY) are ready to showcase our national sport and hopefully bring a championship home to Halifax. “The guys are super excited (to play in Halifax),” said Jackson, and according to Halifax’s enthusiastic fans, we are super excited to have them here!

We had a chance to take in the action of the Thunderbird’s inter-squad preseason game at the Scotiabank Centre in November and not only did we experience a party, we were also spoiled with high-paced, skilled lacrosse. These games truly have something for everyone and fans feel like they are a part of the action. “In lacrosse, you are looking at anywhere upwards of 15-35 goals a game. There’s a lot of action, there’s a lot happening and fans are always going to be entertained,” said Jackson.

I had a chance to speak with Jackson about his journey – a young boy growing up in Sarnia to making it all the way to the pros. “I started playing lacrosse when I was three years old,” he said. “It was the only sport I was old enough to register for and I fell in love with the game.” He started playing minor lacrosse in Sarnia before heading to Kitchener to join the Junior A team, then on to the University of Michigan on a lacrosse scholarship. Along the way, he has had the opportunity to play on many provincial and worlds teams and his lacrosse journey eventually led to him being drafted 7th overall in the 2016 entry draft by the Rochester Knighthawks, then on to Halifax. Looking to check out our new team with an evening of affordable family fun? The Thunderbirds offer special pricing for children under 12 years which gets them to any regular-season game for $15 in the Upper Level and $20 in the Blue Section. They also offer holiday packs – a great gift for the young sports fan!

Get ready to ‘feel the thunder’ and cheer on our Halifax Thunderbirds! 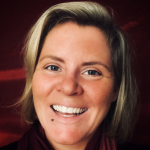 After more than a decade of calling Northern Canada home, Sue Dinham relocated back to Halifax, where she grew up. She shares her life with a great guy who loves to laugh and their two adventurous daughters. Sue loves to explore the world or just her own backyard and enjoys using words to energize, to inspire and to entertain. When Sue isn’t writing, you will find her trying to make her garden grow, trying not to Pinterest-fail in the kitchen or drinking coffee. Always time for coffee.