Hiking Toddler-Style: One Kilometre per Hour on The St. Margaret’s Bay Trail It’s a gorgeous Nova Scotia fall day. My husband and I have planned a brisk family walk along the St. Margaret’s Bay ‘Rails to Trails’ Trail, starting at the former French Village Station in Tantallon. Our 2-year old will soon fall asleep in the Mountain Buggy stroller (we predict) soothed by the fresh autumn air and lulled by the sound of the wheels against gravel. Our plan is to walk for a while, and then at some undefined point, turn around and head to the Bike N’ Bean cafe for a yummy coffee and treat. The perfect morning! This section of the trail is a favourite of mine. I grew up nearby, when the tracks were still there. As a teen, my friends and I spent our evenings walking the tracks around Boutlier’s Point and Hubbards, sometimes stopping to roll a cigarette. The movie ‘Stand by Me’ was popular at the time, and somehow smoking on the tracks was a cool thing to do. Screen grab from ‘Stand by Me’. Copyright: Columbia Pictures

One summer, my friend from Hubbards found an abandoned railway cabin along her section of the track.  On exploration, she discovered it had a phone jack that still worked- and better yet, was hooked up for long distance calls! This was at a time when it was still long distance to phone from Hubbards to Halifax. It was even long distance to phone between Boutlier’s Point and Indian Harbour, even though you could actually see the houses you were calling across the water!  It was  a time before internet, before caller display; a time when, goaded by your friends,  you could prank call your teachers, by looking their names up in the phone book: “ask Mr. Blair if his refrigerator is still running!” My friend brought her telephone to the railway hut every evening that summer, plugged it in, and spent hours talking to her boyfriend in British Columbia for “free”. I always wondered what CN thought when they saw that phone bill! I don’t smoke anymore, and the tracks are all gone. In their place are sections of trail operated and maintained by various groups such as the St. Margaret’s Bay Rails to Trails Association. It’s a lovely concept: miles upon miles of flat, smooth trail shared by cyclists, pedestrians, pets and even all-terrain vehicles, all graciously sharing the space. Some of our more adventurous friends  -the ones with grown-up kids-  take large sections of this trail by bike. They begin their journey at the Chain of Lakes Trail, entering at Ashburn Golf Course on Joseph Howe and cycle all the way to Tantallon. When they are finished we see triumphant victory selfies on Facebook. “We made it!” their happy grins exclaim, as they sip the Bike N’ Bean brew, their skin glowing, hair slightly matted by helmets. They look great. And there’s not a toddler in sight.

After a brief run around the pumpkins at Boutilier’s market, we park at the Bike N’ Bean. But for us, the day doesn’t go as planned.  Firstly, darling hubby can’t wait for a coffee, and he needs to go to the bathroom. “Couldn’t you have gone before we left the house?” I ask, in that accusatory manner in which mothers of toddlers tend to address their husbands. 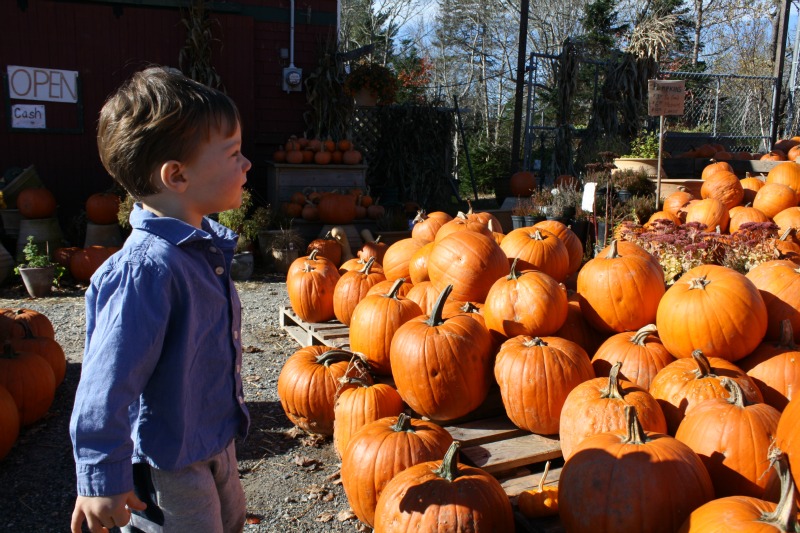 We make a deal: He will go in to the cafe, buy some take-out coffees and a treat for the baby. I’ll walk ahead and he’ll catch us up. It’s already dawning on me that toddler may not sleep, and that I could use a coffee too. By the time hubby catches up with me, about 50m down the trail, our 2 -year old has decided he never wants to sit in the stroller again.  And rather than taking the trail as I intended (briskly, in a forward-moving fashion), he is instead running erratically from side to side, exploring forward and backward, in and out of the woods, looking for sticks, stumbling over rocks, and stopping to watch the All-terrain vehicles go by,  calling “truck! truck!”.  Then he just sits. It is worth mentioning here that the ATV users on the St. Margaret’s Bay Trail are the most considerate I have ever known. Every single driver slows down to a snail’s pace, smiles and waves. Several healthy joggers and cyclists also pass us, smiling and waving.  One hand on the empty stroller, I  adjust my sunglasses, balance my coffee and my camera, and try to wave back cheerfully, while keeping an eye on my little guy who has disappeared into the woods again.  Hubby is forging ahead, enjoying the walk. We make it as far as the bridge, and then we turn back. We have travelled about one kilometre, and it has taken us the better part of an hour. The coffees are gone,  and now I need to pee too. The toddler is getting a little crazy and I am genuinely worried he will actually jump off this bridge. Hubby produces the treat he has bought at the Bike N’ Bean. Wrapped in a brown paper bag, it is a huge, delicious tea biscuit covered in sugar and blueberries. We coerce toddler back into the stroller and he digs in, his cold, red little fingers now blue and sticky from the fruit.

Halfway back to the Bike N’ Bean, he’s out of the stroller again. He finds a big granite rock, that is partially covered in moss, and climbs on top of it. I swing my camera around my back so I can brace myself to catch him when he jumps off, but instead, he lies down. He wants to sleep on the rock.  Now this is actually pretty cute, and the joggers and cyclists who pass us slow down and smile. After about 5 minutes, he jumps off the rock, takes off his coat, and climbs back on again. At last, we make it back to the Bike N’ Bean. I dash in for a moment, but we can’t stay. It’s warm, quiet and peaceful in there, with couples talking intimately over hot drinks, a mother and young child playing a board game, an author-type working away on his laptop. Our toddler would destroy this peaceful scene in about two minutes, so there’s no just no way… and besides, we’ve had our coffee. We pack baby and buggy into the car, and in a blink, we’re heading back to the city.  Our toddler falls asleep about 2 minutes down the 103. When we arrive home to the North End of Halifax, we leave him napping in the driveway (in the car, closely attended by hubby who also naps, in the passenger seat).

I have mixed feelings about bringing my kids up in the city. The idea of playing in the backyard is so strange against my memories of playing in the woods and walking along the tracks. I have a friend who still lives out in Hubbards, and her kids know how to climb and run and explore way more confidently than the city kids I know.  In the city, our neighbourhood walks too often terminate at Tim Horton’s or Starbucks. This is why I am grateful for the Rails to Trails, and all the people who support it. I love the fact that you can pick up the trail anywhere along the route. I love the fact that the space is shared so kindly amongst users. I admire my friends who cycle great lengths of it, but at the same time I feel very at home  just moseying along with our coffee cups and our uncooperative toddler. Best of all, I love the way no one on the trail passes you without some kind of greeting.

So, I guess the message is that if you haven’t experienced any of the trails around Halifax, then get out there! Just remember: if you have a toddler, things may not always go to plan!

NOT SURE WHICH PATH TO TAKE?