As a  teenager I returned to my old elementary school one day, for a trip down memory lane. I remember being baffled at the knee-level height of the the drinking fountains. Surely, I had never been that small!  Upper Clements Park, just outside of Annapolis Royal in Nova Scotia, is this kind of place. When you return as an adult, you are immediately astonished at the simplicity of the amusement park that as a child, seemed so totally wild and gargantuan. Next, as a busy parent, you are eternally grateful for its modest size, its nearby location (about 2 hours from Halifax)  and the fact that on any given weekday, you are unlikely to find any crowds. Upper Clements Park on a Weekday: No crowds

Let me repeat:  No crowds! In fact, on the Wednesday afternoon in July that our family visited Upper Clements Park,  I counted about seven other families, plus a large group of very well-mannered Cadets from all across Canada, numbering about 100. As we left the park that day, I asked Bill, the friendliest security guard in the world, what he thought their numbers had been. He said about 300, but added that on the weekends, the crowds can reach 3,000.

The queues at Upper Clements Park

But it’s not only the quietness of the park, or Bill’s warm personality which makes Upper Clements Park great. Upper Clements Park also offers lots of services that make life a breeze for families travelling with infants or toddlers, like a stroller rental service.  This was something I hadn’t expected. The next pleasant surprise was the little Evangeline Train that putts around the entire park, hop-on, hop-off. We found that the train not only provided a  great way to get to know the park, but also served as a very effective toddler-calming device. There is a carriage for strollers at the back of the train. There were plenty of really simple, cool things for toddlers to do, such as this  Sonic the Hedgehog-style playground (the Tube Slides), built on a hill. Notice that there are steps as well as slides for the less adventurous. And at the bottom of the hill: the awesome Ball Room. The Carousel is just right for little ones.  There is one sit-down bench for Mums and tots. We went around twice in a row. There are also several other rides for toddlers amongst the 30 attractions at Upper Clements Park, including the Convoy Trucks and the Wading Pool. We went around twice!

For parents who need some shade or a quiet space to feed their infant,  there is a beautiful, calm Family Room minutes away from the park’s entrance. When I  dashed in to snap this photo, I noticed how cool the temperature was inside. Next door, there is an enormous, clean Family Bathroom, situated in its own little whitewashed hut. The food in the park is mostly delicious junk food, but if you wanted to bring some healthy sandwiches, you could use the shady orchard Picnic Area  just outside the parking lot. You could easily walk there for a snack and re-enter the park. Time it right, and you could probably pick your own apple for dessert! 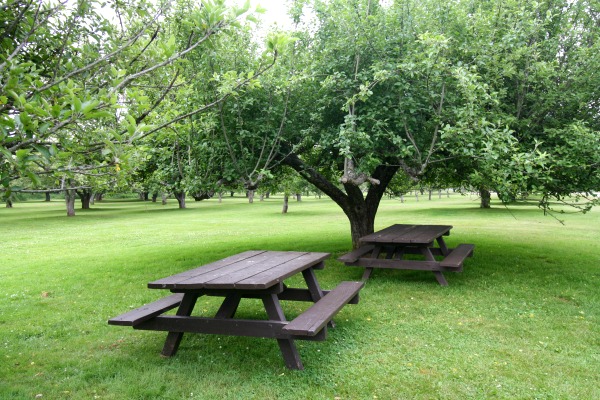 So, now you are asking, did this woman bring her family all the way to Upper Clements Park to go on a few kiddie rides,  have  a sandwich, and use the bathroom?  Well, yes..and no.

Please don’t make fun of me, but just like a fellow blogger who visited Canada’s Wonderland, but hates roller coasters, I shiver at the thought of speeding along some rickety old track in a wooden crate. My husband feels the same way. He strained his neck two years ago on a roller coaster at a similarly sized amusement park on PEI (we think that at 6’4″ he was actually too tall for the ride!) So, we avoided the Tree Topper Roller Coaster.

But we did visit the famous Log Flume, called the Sissiboo Sizzler. My husband went in the log with our 6 year-old, sitting in front of her, as advised. Our train-loving two year-old was fussy at this point, and I was worried he was going to Houdini his way out of the stroller, so  I asked a couple of Cadets from Newfoundland to babysit him while I ran up onto the bridge to take a few photos (thank you Cadets!). My heart stopped when I saw this empty flume.

But it’s OK. They were on the next one.  Here they are at the end of their journey, totally invigorated! We also visited the Bumper Boats. In fact, there was a really fun 10 minutes toward the end of the day when it seemed everyone in the park was on the Bumper Boats. Well, all the Dads and big kids anyway. Moms, tots and strollers waited on the dock for the ships to come in!

And of course, my gorgeous girl – now a confident swimmer, and tall enough to do almost everything- fulfilled her dream of going down the Fundy Spray Waterslide… many, many times! So, Despite its modest size, Upper Clements Park still had a lot more to offer than we could experience in one afternoon, especially if you consider the Tree Topper Adventure Park  next door.

I’ll be honest. I had been dreading the Amusement Park experience, thinking that our two-year old would be a handful. And he was, at times. But the thoughtful consideration of Upper Clements Park to include stroller rental, nice bathrooms and a few toddler-friendly rides and playgrounds made our day really easy…and really fun. Thank you Upper Clements Park!

Helen Earley is a Halifax-based writer.  She and her family were guests of Upper Clements Park.

Sign Up for Email Updates
Don’t miss out on the fun!
Tags:Annapolis Valley, Digby

Helen is an award-winning contributor to the Family Fun Canada network, and the former City Editor of Family Fun Halifax. With a degree in New Media Journalism and Photography, she worked as a flight attendant for a major British Airline for 11 years before returning to Nova Scotia to teach, write and be a mum. Stay in touch at helenearley.com or on Twitter @hfxhelen.