So many rad runners and running places in Edmonton. Photo credit: Dawn/Flickr/CC

My chest wheezes, my legs burn, my heart races. After, I change out of my sweat garb, wash my bright pink face and walk away with a very large grin. It’s run time and so far, I’m still alive.

My relationship with running is one marked by commitment issues. Since I was young I’ve ran in fits and spurts usually attached to being part of a sports team in my youth. Now that I’m all about adulting (kid, partner, 9-5 job, freelance work, social life), running is suddenly a more attractive exercise option. Running helps me juggle all the adult craziness that is life. About four months ago I decided to start running again in an attempt to say au revoir to some of my residual baby-mama pudge.

In the last few months I’ve discovered that: Edmonton has some rad places to run, serotonins are better than coffee and exercise helps me reach goals. I recently started using a Fitbit and have a conservative daily steps goal of 10,000. On days that I run I’m guaranteed to surpass and possibly double my goal and I love it (#winningatlife).

So far, running has been a great stress reliever. I run at the gym about 50% of the time but I also love exploring Edmonton’s green spaces. My clothes fit better, I feel great after each run and I’m learning to wedge in a little more self-care/mommy time. I’ve even signed up for my first five kilometre race later this month.

When I first started running I asked local runner/racer Kacey Keycko for her recommendations on places to run and how to stick to a running program. According to Keycko the trick to becoming a regular runner is easy: just get your booty out of the house.

“I think the first step is to simply get out the door! It’s easy to overthink it and come up with lots of excuses as to why you can’t get started right now. So, just slip on a pair of running shoes and commit to giving it a try… Picking a 5km race and signing up for it is such a good way to journey into running.”

Keyko has been running for nine years and is one of the crew members/founders of the River City Runners, a local running group who participate in races around Edmonton and Canada. Keyko recommends starting off with an app like the Couch to 5km app and doing run/walk intervals if you’re a beginner.

Here’s a list of my favourite running routes in Edmonton:

My hood – map out a route in your neighbourhood using either the Strava or Map My Run apps for great starter runs in familiar territory. I know my streets, the landmarks and traffic flow so I was pretty comfortable with starting off with smaller runs in my hood.

McNally High School loop – Forest Heights Park is a nice natural loop for beginner runners: there’s a paved trail along the western edge of the park and side walk along 84th Street. Plus the reward of killer city views by the benches. My favourite time to run there is early in the morning with my toddler in his stroller. It’s a great time to see wildlife, minimal people and gorgeous vistas of downtown.

Birdhouse Trail – Park at Emily Murphy Park. Head west from the parking lot. Once you pass under the Grout Road Bridge, you’ll hit the trail along the river. Choose either trail, but I like the one closest to the river. Run out for half of your desired distance, turn around, and go back the way you came.

The Edmonton Pride Run route – Park at Emily Murphy Park. Head east from the parking lot and jump on the trail. Continue on the trail until you arrive at the blue LRT bridge. Cross the LRT pedestrian bridge and turn left down River Valley Road. When you reach the Grout Road Bridge, cross the road and then head south over the bridge. Just keep running straight on the side walk until you’re back at Emily Murphy Park (5km total).

Dawson Park – Park at the Dawson Park dog-off leash area parking lot (there will be off leash dogs on this route). Head east on the paved pathway and hit the trail on your right as soon as your see it. Run out for half of your desired distance, turn around, and go back the way you came.

“Edmonton has some truly incredible trails and running is a perfect way to explore the beauty of the Edmonton’s River Valley,” says Keyko.

** Sport Chek gave me a Fitbit to try out for this article. All opinions above are my own and Sport Chek did not review prior to publishing. Happy running!** 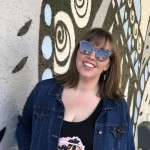 Miranda Post is a PR gal by day and a writer/connector/crafter and mom the rest of her time. No matter the destination, you can find Miranda exploring the nearest farmers' market, thrift store and coffee shop. When she's not writing, Miranda loves to explore the trails and beaches of Haida Gwaii with her tsunami of a son. She’s written for the Canadian Press, Vancouver Sun, Dazed and Confused, Comox Valley Record, Avenue Edmonton, Lululemon, Inside Vancouver and Vancouver Homes & Living. She blogs her about great jobs, travel and life at www.anchorsandproteas.com. Follow her on Twitter or Instagram.