Saskatoon is the City of Bridges One of my favourite things about Saskatoon is that it’s the City of Bridges is the beautiful river running across it. Walks downtown are even better when you can stop and admire the river. Walks along Spadina are my absolute favourite. Because of the river, we need a lot of bridges to go from one side of the city to another. Saskatchewan is Land of the Living Skies and Saskatoon is the City of Bridges. You can enjoy the living skies perfectly from any of the bridges.

We have eight bridges going across the South Saskatchewan River. (You can also find 49 overpasses and 24 pedestrian crossings.) I decided over the weekend that we would go out and do a bridge tour. If there is one thing I love, it is being a tourist in my own city. I’ve been over most of them at one time or another, but I wanted to learn more about them and write about what we found. There were also a lot of puddles for my son to jump in as we walked to the bridges. If you’re looking for something to do, you can always check out the bridges. There are four bridges in the downtown area that you can walk across and end up in a whole new Saskatoon world.  You can stand in awe of our beautiful river. Click on the bridge names for their locations.

Chief Mistawasis Bridge opened in October of 2018. It connects the North Industrial area with Saskatoon’s east side. The bridge has a bikeway on the north side and a multi-use pathway on the south side at the same level as the roadway.

This bridge opened in July of 1983. It links the city’s northern areas with the south and east side.

This one was a bit of a mystery to me. I’m going to have to do more exploring! It is a deck arch bridge. Spadina Crescent Bridge crosses a ravine in City Park. It was built in 1930.

The University Bridge officially opened in November of 1916. It links the University of Saskatchewan with the central part of the city across the river. It has two side walkways.

This bridge can get you onto the beautiful Spadina Crescent or down 25th Street on one side and on the other down College Dr or Clarance Ave N. It’s a pretty busy bridge and it sees a lot of traffic. We always know how important it is when it has to be closed down! University Bridge view from under the Broadway Bridge. Photo by Erin McCrea.

This is one of my favourites. I spent years crossing it to get to work in the morning, and I was lucky enough to see many sunrises, the occasional sunset, the gorgeous sky, and the beautiful river. It’s always been one of my happy places. The paths along the side are for people or bikes. As my son walked across with us, I got to teach him the importance of walking on the right side and staying out of the way of oncoming people traffic. Broadway Bridge connects the beautiful Broadway Avenue to the downtown core areas. It leads to 19 Street E or 4th Avenue S.

The Broadway Bridge opened in November of 1932. Walking Across Broadway Bridge. The photo was taken by Erin McCrea Broadway Bridge. This photo was taken from Victoria Bridge. Photo by Erin McCrea This photo was taken while walking under the Broadway Bridge. Photo by Erin McCrea

The Traffic Bridge is an interesting one. It’s been taken down once, and replaced with a new Traffic Bridge that looks exactly the same. I enjoy walking over and looking at all the other bridges.

The original Traffic Bridge opened in October of 1907. It was closed in 2010 due to safety concerns. It was taken down by explosives (with many people there to view it) in 2016. The new Traffic Bridge opened in October of 2018. It’s similar to the old one but slightly wider and taller (thank goodness.) The bridge takes you to Spadina or 3rd Avenue S downtown or on the other side to Victoria Ave or you can turn onto Saskatchewan Crescent. It’s walking distance from both Broadway Ave or Rotary Park on one side and on the other to many downtown restaurants or the Remai Modern. About to cross the Traffic Bridge in our matching outfits. The Senator Sidney L. Buckwold Bridge opened in October of 1966. It was first named the Idylwyld Freeway (also its location). It was re-named in 2001 for Sid Buckwold.

This bridge has a path for walking. Both directions take you down Idylwyld Drive. If you’re walking, it can lead you to Rotary Park or River Landing. You basically find beauty no matter what side you are visiting. It opened in July of 2013. My favourite part about this bridge is honestly the beauty I see driving over it every time. The view is fantastic. The river is perfect at that spot, and I always seem to see something new. My son loves it because he can often see trains right next to us on the train bridge as we drive. I don’t have any photos of this bridge because I’m always driving when we’re on it. It’s not an area that I often stop. It’s my favourite bridge to drive over.

We also have two railway bridges. As I said, you can see one of the railway bridges from Circle Drive South Bridge. The other one is the Canadian Pacific Railway Bridge. In a time that doesn’t require physical distancing, you could cross over it on the pedestrian path. I’ve never seen a train go over it when I’m up there, but we always enjoy crossing it. It’s a truly beautiful sight, and when it opens up again, we will be there to go for a walk on top of the bridge. It’s an amazing stop for both tourists and people for people that live in the city of bridges. It makes you appreciate this amazing city we live in.

Those are the amazing spots you can visit in our City of Bridges. They are a part of Saskatoon’s history, and they help connect some amazing places in this wonderful city. It’s not a huge adventure, but if you and your family are searching for something to do, take a day and walk over the bridges. We used The History of our Bridges from the City of Saskatoon for our day of exploring and for the bridge details. Taken at the top of the RUH Parking garage of the University Bridge. Photo by Erin McCrea 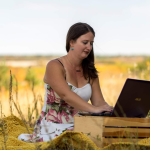