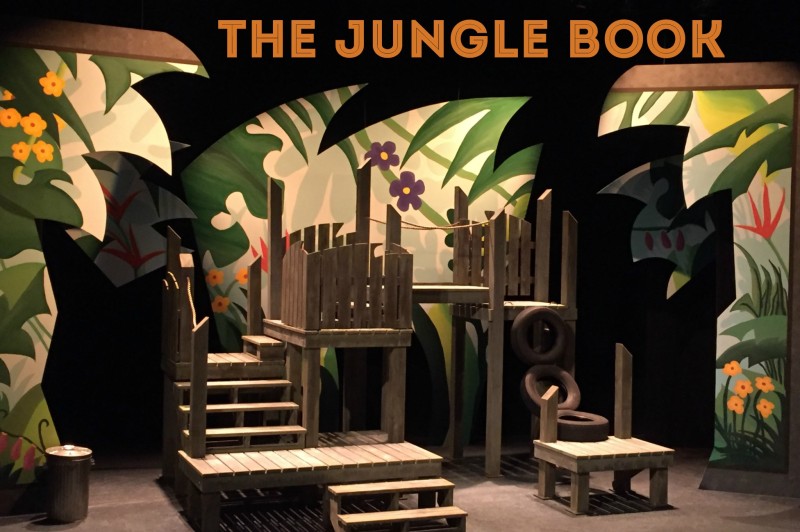 Carousel Theatre for Young People (CTYP) rather brilliantly sets Rudyard Kipling’s coming-of-age tale on a school playground. The production starts with a young girl disappearing into the pages of The Jungle Book. She is new to her school and doesn’t yet have any friends.  I’m sure we all have childhood memories of the games played by certain “wild animals” during school lunch hours. While The Jungle Book speaks most profoundly to those who struggle to belong, I think everyone can relate to the tale told on Granville Island’s Waterfront Theatre stage.

The hour-long production follows Mowgli (played by Camille Legg), the man-cub, as she learns the rules of the jungle. Taught by Baloo (the bear played by Kyle Jespersen) and Bagheera (the jaguar played by Luc Roderique), Mowgli comes to understand that jungle law exists for safety and survival. While desiring independence and freedom, through high-stake risks, Mowgli realizes the importance of “the pack” (aka family).

The Jungle Book has a few older themes and for that reason this production is geared towards kids ages 6+ up. I was very impressed by the way the director (Kayla Dunbar) handled the death of Shere Khan (the tiger). The rules of the jungle state you can only kill for food or protection. Shere Khan’s deep mistrust of Mowgli causes the tiger to stalk the man-cub with the intent to kill. Rather than expose the young audience members to a scene of adults fighting, CTYP reminded us the story was being told on a playground. A child from the beginning of the play returned and with her came 2 stuffies: a tiger (Shere Khan) and a buffalo (to represent the stampede). The message was portrayed, the story was told, and there were no tears or traumatized children. Positively brilliant! Kyle Jespersen as Baloo and Camille Legg as Mowgli. Photo by Tim Matheson

My youngest son has treasured his Baloo stuffie since he was a year old. To see Baloo come to life on stage was magical; Kyle Jespersen’s portrayal of Baloo stole the show! I have no idea how many hours of bear movies the actor watched but he mastered the movements perfectly!

We have been to a number of Carousel Theatre productions (Dot & Ziggy, Shakespearean Rhapsody, James and the Giant Peach, and Go Dog Go) and every show has been top-notch. The acting is Broadway-worthy, the set design is magical and appeals to kids, the storytelling is infinitely respectful of its audience, and the length of the performances is age-appropriate. I can’t sing CTYP’s praises enough. And, in case you aren’t convinced, just have a look at the shows coming in their 2016/17 season: Good Night Moon and the Runaway Bunny; A Charlie Brown Christmas; Dr. Seuss’ The Cat in the Hat; and Good Day and Good Night. Subscription tickets for these shows go on sale May 25th.