I remember a time when I would wait with eager anticipation for the Calgary Stampede. My mom would head down to 9th Avenue at 6:00 am and save a spot for us to watch the parade in the comfort of our own lawn chairs. The sounds, the smells (good and bad), and the excitement have stuck in my memory all these years.

We would head down to the Stampede grounds where I could let the wind whip through my hair as I rode the swings or go around, around, and upside down on the Zipper without feeling like my lunch might come back up. My dad would shell out money for me to play a dozen games only to come home with a lousy small stuffed animal. But to me, it was my prized possession. My proof that I had once again conquered the Stampede.

Those excuses only got me so far. Now that my kids are a little older, we knew it was time to take them to the Stampede, whether I liked it or not. And that is what we did this year.

We arrived at 11:00 am sharp with three little boys in tow and made a beeline for the Kids Midway. It was nice being one of the first families there….no lineups! At first, the kids were in awe. They had never seen anything like it. The rides must have looked gigantic to my 2 1/2 year old. The first stop was the caterpillar roller-coaster.

My 5 1/2 year old was a little apprehensive at first, so he sent his 4 year old brother on the ride first. After seeing him and my husband have a great time, he knew he could do it too. He had this huge grin on his face the entire ride!

He was hooked. We couldn’t buy more ride tickets fast enough. Then it was the bumble bees, the bumper cars, the slide, the motorcycles….and on and on and on.

After an hour of riding, it was time to eat. We pulled the kids away from the rides and headed to the midway. After walking down rows and rows and rows of food stands, we finally found one that the kids would love: pizza. And love they did. They each ate an entire slice of Hawaiian pizza.

After stuffing their faces with the mini donuts and watching some Thomas The Train on the Coca Cola Stage, it was back to the Kids Midway for more rides and games. By this time it was much busier and much hotter. The boys (and mommy) were getting a little cranky after another hour of waiting in lineups. We knew it was about time to leave. 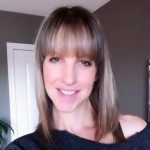 Jen is a stay at home mom to 3 little boys, ages 5 and under. Life gets a little crazy at times, but in her precious moments of "free-time" Jen likes to cook, bake, exercise, and of course, have fun along the way. Visit Jen's blog at www.familyfoodfitnessandfun.com