We love taking guests around Calgary. Until recently, it hasn’t really involved Evan that much. He would often go with us but he didn’t really get it or care. These days, though, he loves it. It’s a grand “adbenture” (that’s how he says adventure). The more new and exciting adbentures, the better. I thought it would be fun to chronicle a few of them here.

Our friends, Molly and Jon, were visiting from Austin. They were only here from Friday until Sunday so it was an insanely quick trip. We didn’t get to show them much of Calgary but we decided on a whim to take them to the Calgary Tower. We’ve shown the tower to Evan when we’ve passed by it but he didn’t really realize that you could go up in it. He was very excited when we told him that not only COULD you go up in it but we were GOING to go up in it. He promptly asked if we were going to climb up the outside…..um….no.

Before heading to the Tower, we took a detour by Regency Palace, which is our favorite dim sum restaurant, for some brunch.

After eating a ton of food, feeding the fish and playing with the laser lights, we were ready to head to the Tower. Evan loves walking downtown and looking at all the buildings. We passed by Stephen Avenue Mall & saw a crowd gathered. Since you never know what might be going on, we decided to check it out.

The things you see on the mall

Who knew that we would find a street performer with a rubber glove on his head. Weird, right? We decided to keep moving….

The Tower adbenture started on the elevator. Evan couldn’t believe how long it took & he liked looking at the numbers go up and up and up. When we got off the elevator, it only took him a minute to decide to go out on the glass observation deck (much to his Dad’s chagrin…he’s too scared to go on it.)

It took Evan a minute to go on the glass.

and the Calgary Stampede…..

The Stampede (at the back next to the Saddle Dome)

Then it was back down the elevator & past the cow with one ear. We had lots of chats about what may have become of his other ear. Evan started to interrogate passers by to determine if they may have been responsible for the crime so we decided we’d keep moving.

On the way home, Evan got a piggy back ride from Mommy…..the perfect end to a grand adbenture!

Me & Evan on a downtown Calgary adventure. 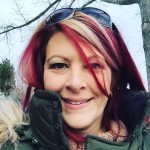 Merry is an American living in Calgary since 2004. She is mommy to Evan and stepmom to Will & Nicole. She is the author of Merry With Children where she writes about her crazy life as a full time working mom and stepmom.