Address: 9th St and Centre Ave NE.
This playground really shows what you can do with a only a modest footprint. It provides lots of different activities for little kids and big kids and with the ramps and recycled tire flooring, it’s accessible too. Every community should have a playground this good. Where: (Parkdale/West Hillhurst)
Address: 5 Ave and 27 St. NW.
This helicopter themed playground has a big kid and a little kid area (with recycled tire flooring). There’s a large variety of different equipment in both areas as well as a large grassy area for running around. Where: Inglewood
Address: 14th St and St. Monica Ave SE
This park is a real gem. It is truly a community space with a playground that extends throughout the entire park. There is a Gazebo, plentiful seating, beautiful, mature shade trees and soft fall carpet flooring. Children of different ages can play together on most of the playground equipment, just in different ways. It is accessible for children and adults alike with low motor skills. Where: North Glenmore Park
Address: 7305 24 St. S.W. The first playground from the west entrance.
This concept playground demonstrates 10 different types of safe fall flooring. It is located near the river in the middle of North Glenmore park with a picnic area and big shade trees right beside. Although there is not much for kids younger than 2 or 3, older children will love one of Calgary’s few large merry-go-rounds. Address: 1 Prestwick Manor SE
Unlike many of the playgrounds on his list, this located on a very modest park area but it is so unique it still made the list. With a pirate ship play structure on one side and a castle play structure on the other this playground provides an amazing opportunity for imaginative play. Where: Prince’s Island Park, just north of downtown.
This is one of Calgary’s largest playgrounds. With a Calgary theme and located on the North side of one of Calgary’s most beautiful parks this one has something for everyone. It’s even walking distance to Eau Claire’s water park. There is no parking on the island, so you will have to park and walk across one of the bridges.

Address: 811 Radford Road N.E. (Beside the Renfrew Community Association – NOT the athletic park).
This playground was designed exclusively for children 5 and under. With safe fall carpet flooring and ramps there is no better playground for early walkers and even crawlers. More proficient walkers will love the independence they can have on the wide variety of equipment that is just their size. Where: Crescent Heights
Address: 617 1 St. NE.
Rotary Park has a big toddler play structure with some of the best musical panels anywhere and a ‘telephone’ that works amazingly well. The bigger kid play structure has a lot of different climbing features including a large climbing wall. To top it all off they even have a wading pool just behind the playground during the summer months. Address: 90 Ave. & 24 St. S.W.
This large playground has accessible flooring throughout and includes a wheelchair accessible spray park in the summer months in addition to the preschool and and school-aged play structures. This is one of the only playgrounds in the city where the school-aged play structure is at all accessible to people in wheelchairs or with low motor skills. With the addition of the pathways along the water the large gazebo and plenty of picnic tables it makes a great choice for a family day at the park. Where: Stanley Park/Elboya
Address: 4011 1A St. S.W.
More than anything what sets Stanley Park apart is it’s great location. It has a great picnic area with large shade trees and although the playgrounds are not spectacular, there are three of them. If that isn’t enough you can take advantage of the pathway system that runs right along the river. 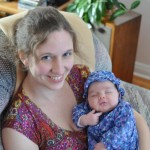 Dana spends her free time seeking out the best indoor and outdoor places to play in Calgary with her son Gordie and blogging about them at Calgary Playground Review.