10 Essential Things to do in Halifax with Kids This Summer 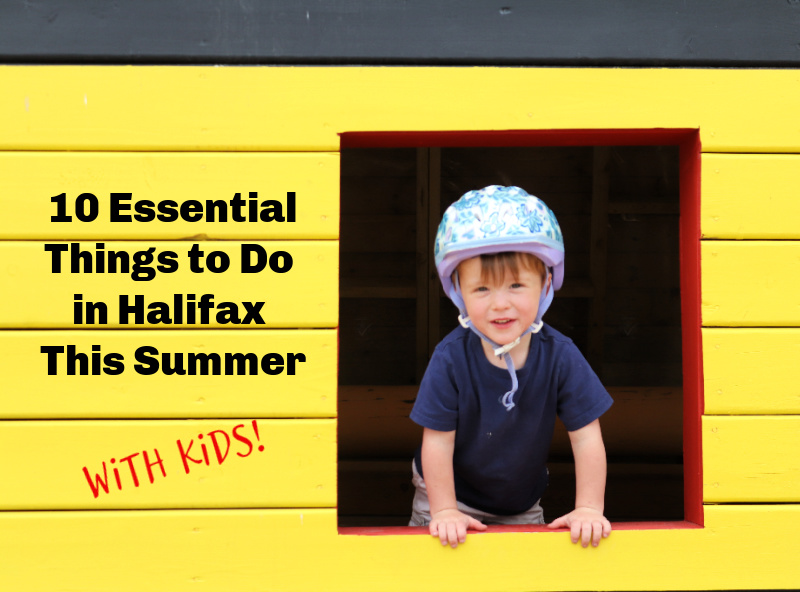 His official name is Theodore II, and he is a life-sized, fully operational tugboat moored in Halifax Harbour. He was built during the heyday of the television show, Theodore Tugboat, which aired for many years on CBC and PBS. Now, although many have forgotten the TV show, everyone knows Theodore. This year, Theodore is docked at the Bedford Waterfront, and is only available for a wave (pardon the pun), and – scary news indeed – he is also for SALE! We are hoping and praying that our favourite Halifax icon finds a new owner.

Just off Spring Garden Road, on Dresden Row, Woozles is a small but delightful bookstore devoted solely to children. Woozles celebrate its birthday annually, and have readings in the Halifax Public Gardens in the summer. In case you didn’t know, what a Woozle is, it’s a fictional character from A. A. Milne’s Winnie the Pooh book. The Halifax Central Library is a stone’s throw away.

3. Clamber up The Wave

One of the best things to do in Halifax with kids is to climb up The Wave, at the waterfront in front of the Tourist Office.  Created in 1988, this strangely attractive blue cement structure, which stands at nearly 4 meters tall, looks like a great big blue tongue. You’re not really supposed to climb the Wave, but everyone does. Tip: you will get better traction if you take your socks off (as long as your feet aren’t too sweaty – ha ha). This whole area is great for kids, with the Submarine Playground, and plenty of interesting things to look at on the Halifax boardwalk.

4. Interact with Science at The Discovery Centre

The Discovery Centre is a great place to go on a rainy day in Halifax. This interactive science centre has 5 distinct areas: Energy, Health, Flight, Ocean and Just for Kids, plus a travelling exhibit on the lower floor. Highlights of the museum include the Dome Theatre and of course the famous bubble machine, which followed the centre from its old location on Barrington Street. A Halifax classic!

5. Eat the Best French Fries ever at Bud the Spud Chip Truck

For pure salty, summer deliciousness in a paper bag, head for the Bud the Spud chip truck, which has been serving fried potatoes (with salt and vinegar if you like) since 1977 in the exact same location on Spring Garden Road – in front of the former Halifax city library. When the library moved, the chip truck stayed. Eating a delicious, greasy bag of french fries is one of the best things to do in Halifax with kids this summer.

6. See a Whale Eyeball at The Quaker Museum, Dartmouth

Gross alert! This gory eyeball is housed in the oldest house in Dartmouth built by Whalers from Nantucket, in a jar, underneath a modesty cloth, in case anyone is too disgusted. The Dartmouth Quaker Museum is one of Halifax’s lesser-known and quirkiest attractions. It’s a tiny museum, reflecting Dartmouth’s very early history – and well worth a visit next time you are in Dartmouth. (Note: a reader told us this Museum is closed at the moment – check before you go!)

This tiny house (literally, the size of a broom cupboard), was home to Nova Scotia’s sweetheart, folk artist Maud Lewis, and her husband in Marshalltown, Nova Scotia. After her death, the entire structure was moved the Art Gallery of Nova Scotia as a permanent exhibit. Children might be intrigued to know that treasure hunters still seek original paintings by this Maritime artist. For example, in 2017, a Maud Lewis painting found in a thrift store, sold for $45,000!

8. Chat with Merlin the Parrot at the Maritime Museum of the Atlantic

Ah, Merlin! We love you so! Rumour has it that the 16 year old Rainbow Macaw, who is the official mascot of the Maritime Museum of the Atlantic, has actually been quite lonely since the pandemic began, so he’s looking forward to seeing visitors again. But you can visit Merlin any day on the Merlin the Talking Parrot Webcam.  Interesting fact: Merlin’s webcam is actually one of the first public webcams in Nova Scotia!

96 year-old Gus is one of Halifax’s best-loved personalities, and the oldest known living gopher tortoise in the world. His daily routine includes a 3:30 pm shuffle around the Museum of Natural History on Summer Street, followed by a small group of children, clutching lettuce leaves. On sunny days, he can be seen on the museum’s front lawn, munching on clover. Gus’ birthday is celebrated in August each year with a children’s party at the museum. Popular gifts include berries, lettuce or bananas.

10. Hang Out at the Halifax Commons Skate Park

The Halifax Commons Skate Park is one of the best ways to spend the morning or afternoon in Halifax. This is a friendly place, where kids of all ages seem to respect each other and share the space. There are bowls and ramps for all ages and abilities, and skateboards scooters and BMX bikes are all allowed on the park at the same time. There’s also a nice splash pad (above) to stay cool.

Nearby, check out the playground, and of course, the Halifax Oval, where you can roller skate, roller blade, scooter or cycle on a large, flat track. Our favourite thing to do after a skate? Head to Dee Dee’s Ice cream (Top of Cornwallis Street) for a cool treat.

What are your plans for this summer? We’d love to know! Tell us in the comments.