There isn’t a better gift we can give our children, than that of a love for reading. Not only are we helping them develop their understanding of language and overall comprehension, but we’re inviting them into a world where truly anything is possible. Take that gift one step further this summer, and bring them to a place they’ve only read about. Pack your bags – here are 10 of your children’s favourite books – and the places that bring them to life.

Declared a National Historic Site, travel to Cavendish, Prince Edward Island, and be immersed in the fictional world of Avonlea. Explore Anne’s home of Green Gables; walk through the house, and around the farm. Discover Balsam Hollow, the inspiration for the Haunted Wood, and take one of Matthew’s carriage rides down to the Lake of Shining Waters (otherwise known as Campbell Pond). You’ll find Avonlea Village, where you can visit the old schoolhouse and church, this village has been dedicated to creating the community that L.M. Montgomery had written about. Don’t leave without making a bosom friend; you’re sure to find yourself amongst kindred spirits. If you ever find yourself in Portland, Oregon, seek out Klickitat Street, a street made famous by one of our all-time favourite characters, Ramona. Do yourself one better and indulge in the self-guided walking tour, “Walking with Ramona” and bring all of her beloved books to life. The tour will bring you through to Grant Park (just around the corner from Klickitat Street), where you will find bronzed statues of Ramona, her sister’s friend Henry Huggins, and his dog Ribsy. There also happens to be a great children’s playground there too. Who can forget the beloved mouse no taller than 2 inches, living in the big city of New York? The most memorable moments in the novel are the chapters dedicated to the great boat race in Central Park. Make your way to Conservatory Water, east 72nd street. Every Saturday morning, from April through to October, model boat races are held. Get into the action by renting a boat of your own, or just enjoy watching the seasoned veterans race their custom-designed models. You’ll also find story-telling programs and fun climbing structures in the area to enjoy.

4. Little House on the Prairie by Laura Ingalls Wilder With 7 or 8 museums scattered all over the mid-western United States dedicated to the legacy that is Laura Ingalls Wilder and her Little House on the Prairie, you’re bound to run into some pioneer fun on your travels. In fact, they’ve named a stretch of highway, the “Laura Ingalls Wilder Historic Highway”, making it easy for you to know you’re on the right track. The must-hit hot spots include Rocky Ridge Farm in Mansfield, Missouri, where Ms. Wilder lived with her husband – now a museum filled with manuscripts and family treasures, Walnut Grove, Minnesota, which is also home to nearby Plum Creek (it’d also be worth making a stop off at the Pioneer Village in Worthington, Minnesota), and De Smet, South Dakota, where you’ll find 2 Ingalls homes and the one-room school house Laura attended with her sisters.

5. Harriet the Spy by Louise Fitzhugh This beloved spy just so happened to live in Manhattan’s Upper East Side. With another walking tour available, release your inner-spy on the streets of New York. You’ll be able to get an idea about where Harriet may have lived, along with her arch nemesis Rachel and her best friend Janie. You’ll pass by Harriet’s school and the infamous Carl Shurz Park, where Harriet spends a lot of her time, and where her friends ultimately discover the truth about her notebook. Before you leave the neighbourhood, stop by the Lexington Candy Shop and indulge in an “egg cream”, Harriet’s favourite. If your travels take you overseas to New Zealand, make sure to stop in Matamata. A lot of the filming for the Hobbit and Lord of the Rings was done on location here, and as they were so careful to stay true to the novels, I am sure it would be like stepping into the pages of Tolkiens words. Check into the “Hobbit Motel” for a few nights, grab a pint (of Root Beer) from the Green Dragon Inn and you’ll leave feeling 2 feet smaller. A little bit of magic come to life, you will find a Platform 9 ¾ in London, England’s, King Cross Station. While you’re there visit the London Zoo where you will come across the Reptile House, where Harry first realized he could speak to snakes. It may be worth it for your Harry Potter fans to jump on a train at King Cross and make your way to Alnwick Castle in Edinburgh, Scotland. This castle was used in the first to films as the exterior to Hogwarts School. Pick up a broomstick training lesson before you leave. Mark Twain wrote Tom Sawyer based on his own childhood and hometown of Hannibal, Missouri. Head to Hannibal and tour Mark Twain’s home turned museum. Cross the street and you’ll find the home of Tom Sawyer’s sweetheart Becky. Take a turn whitewashing Tom’s infamous fence, and explore the cave that Tom and Becky get lost together in.

9. The Adventures of Sherlock Holmes by Sir Arthur Conan Doyle Pay a visit to 221b Baker Street in London, England and you’ll enter the world of Sherlock Holmes – through the lens of the Sherlock Holmes Museum. Take a two-hour guided walking tour throughout the streets of London and discover the places that inspired Sir Arthur Conan Doyle in his novels. End your stay with a visit to the Sherlock Holmes Public House. Your detectives-in-training will have to see their replica room set up with all kinds of memorabilia including Dr. Watson’s revolver and the head (stuffed and mounted) of the Hound of the Baskervilles. Stephenie Meyer put Forks, Washington, on display. With a “Twilight” map of the town at your disposal, you’ll be able to explore the sights at your leisure. Walk by both the Swan and the Cullen house (the Miller Tree Inn Bed and Breakfast), along with the high school, police station, and hospital. Take a little drive and end up at La Push, the beach where Jacob and his band of werewolves spent their down time. Every year in September, they celebrate Bella’s birthday with a “forever twilight in forks” event.

If these book based adventures don’t have you dreaming of far away lands, how about a movie based adventure? Check out our Movie Inspired Tour of NYC!

What books inspired your travel and adventures? 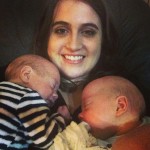 Lindsay is a teacher and mom of 4, including twin boys. Lindsay prefers to watch the world from the side, her children at arms reach and their goofy dad nearby. Follow their antics on her blog, Serendipitous Sundays.