I have a serious soft spot for Chicago. My first media trip was to the Windy City, where I had a chance to explore Michigan Avenue (known by tourists as the Magnificent Mile) on my own. I had the chance to visit again a few years later, when my husband’s company was considering transferring him – and thereby us – to the area.

Chicago also happens to have served as a large, busy set for many favourite movies, so if you have a chance to visit, use these classics for inspiration when deciding what to see and do.

While You Were Sleeping

You may not find your one true love with Bill Pullman in the process, but you can use the system to access popular tourist destinations including downtown Chicago (an architectural tour of some of the city’s historic buildings is on my top to-do list when visiting) and all major sports’ facilities.

If you get hungry during your travels, an ongoing joke throughout the movie features Lucy ordering the city’s infamous hot dogs, while the vendor can never quite remember how she takes it. “Just mustard,” she continuously reminds him, becoming more exasperated with every encounter. Whether buying one from a street vendor, or enjoying a Wrigley Dog at Wrigley Field (see below), stick to Lucy’s advice and lead with the mustard. Ketchup is a highly frowned upon bastardization of the classic. In addition to mustard, onions and relish or a pickle are acceptable additions.

If anyone ever did a better job showcasing the potential for fun things to do in Chicago, it was Matthew Broderick as Bueller, enjoying what was probably the most epic day of playing hooky, both real or fictional.

First stop: a Chicago Cubs game at Wrigley Field, an institution in itself, that also played a noteworthy role in The Blues Brothers in 1980. Chicago is home to two Major League Baseball teams and the city is passionately divided between the two (my shuttle driver made it clear on my first visit it was one team or the other, never both). Ferris, his best friend and his girlfriend enjoy a beautiful sunny day at the ballpark watching the Cubs play. Twenty-five years after the film was released, I had the chance to do the same. 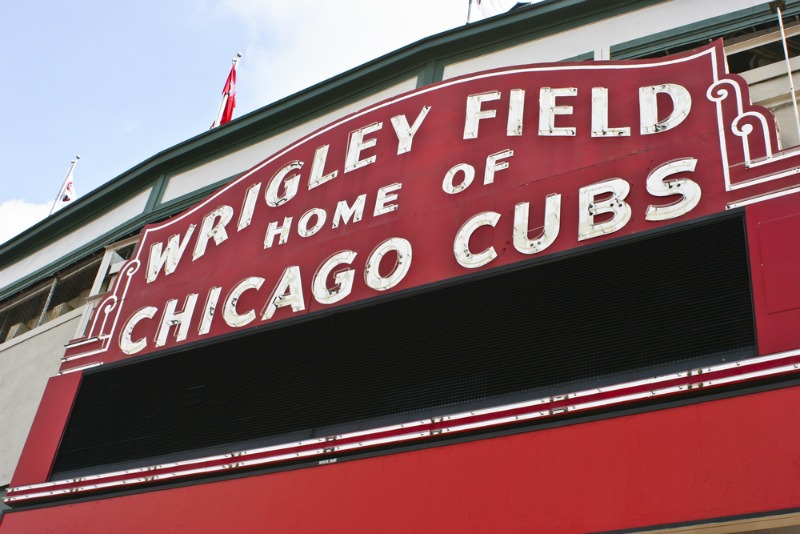 Finally, no day off or trip to Chicago would be complete without a visit or at least sighting of Willis Tower, formerly and still commonly known as the Sears Tower. The tallest building in the world offers a Skydeck experience on the 103rd floor, with stunning views of the entire city and surrounding area. If your inner daredevil is alive and well, you can even venture out to the ledge, with a glass balcony that I can’t even think about without getting queasy. Maybe it’s not so bad: as Ferris notes, anything is peaceful from 1353 feet. I respectfully disagree – there is nothing calming about launching your lunch from that high up.

That’s right, there was a third Transformers movie that I refused to see and couldn’t be bothered to look up the full name of. However, it seemed worth mentioning for two reasons. One, Chicago’s Trump Tower was blown up in the movie, so maybe I should watch it after all, because even on a fictional level, I have to imagine that would be pretty satisfying.

Secondly, parts of Michigan Avenue, including the Michigan Avenue Bridge, serve as a backdrop for some explosive action in the film. While I haven’t seen it, on both trips to Chicago, I spent hours walking up and down the famous mile, home to the John Hancock Centre (tip: the women’s washroom of the Signature Lounge features an incredible view of the city, so be sure to take your camera), Tribune Tower (an architectural masterpiece), the Chicago Water Tower and Millennium Park.

In Divergent, Chicago’s Navy Pier is shown as old and abandoned. I have no idea if the film accurately predicts the future, but if you have the chance to visit the site while it’s still full of lively energy, it is home to the Chicago Children’s Museum, the Shakespeare Theatre, and a ferris wheel that provides unparalleled views of Lake Michigan. Side note: Navy Pier was also one of several Chicago locations used as part of fictional Gotham in The Dark Knight rises, when city residents are evacuated by boat. A classic lake tour by boat gives a great view of the pier, and is the ideal spot to watch the Navy Pier fireworks, every Wednesday and Saturday night during the summer. The fireworks on the lake was one of my favourite Chicago experiences and genuinely had nothing to do with the Mai Tei I had on board, or the pre-dinner cocktails I enjoyed beforehand. It really is a spectacular show and the lake gives you the best view possible.

If you decide the White Sox are the MLB team for you, they are less prolific in film than the Cubs, however Cameron Diaz’s character had access to an owner’s box at U.S. Cellular Field in My Best Friend’s Wedding.

As one friend, a resident of Chicago noted on a visit, you can live in the city and never run out of new things to see or do. However if the ones mentioned here are good enough for Hollywood to feature or blow up, they’re probably worth a visit and a good start when exploring the city.