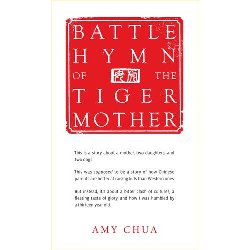 Ever wonder why it always seems to be the Chinese kids at school who are good at Math or exceptional at playing instruments? Battle Hymn Of The Tiger Mother

” claims to answer that question and provide a “look inside the world” of raising two American-Chinese girls who become musical prodigies. The author, Amy Chua, believes in raising her daughters “the Chinese way” which apparently entails a lot of screaming, yelling, berating and nagging. Softer, gentler “western” parents will most likely be horrified by her parenting strategies, and may not even finish reading the book. Those of us who hover in the middle might find some encouragement, even if it is a bit tainted by our own shame.

Ms. Chua is an excellent writer, often quite amusing, but also quite crazy. I mean, is it really necessary to find a hotel with a piano while on a fantastic vacation, so the girls could practice 5 hours a day? Really?

Despite her harsh Chinese parenting methods, I thought she made a couple of valid points that gave me pause to consider. I do have to preface this by pointing out that BHTM is a personal memoir, and does not purport to be a parenting manual.

Love her or hate her, I think it’s brave of Amy Chua to publish her story. She is very hard on the girls but on the other hand, kudos to her for being so involved in her children’s lives. The book also begs the question of where’s the husband/father in all of this. Apparently that’s his story to tell and perhaps someday we’ll be reading his side of the story. Wouldn’t that be an interesting read!

Battle Hymn of the Tiger Mother by Amy Chua is available for purchase at Amazon.ca