Clinging to the western fringes of Ireland is a long ribbon of road, the Wild Atlantic Way. You drive it to find adventure, and the adventure is the drive. Twenty-six hundred kilometres alongside windswept beaches, on the edge of the highest sea cliffs in Europe. Wild describes the Atlantic in a storm and the ride along its edge. From Malin Head in the North to Kinsale in the South, nature in all its forms is on display, interspersed with tiny islands, lighthouses and villages. End a day’s drive in a local village pub with rousing Irish music. In a sporty car, my husband and I tackled the Southern section from Kinsale to Tralee, following the three western peninsulas: Dingle, Beara, Iveragh, including the famed Ring of Kerry drive, which encircles Beara.

The Irish are unusually warm, maybe because Ireland has had to receive more than its share of sea travellers, going back thousands of years. The regional dialect is Gaelic from its first inhabitants, and all signs are in Gaelic and English: Please slow down is “Tóg Bog E”—used in casual conversation to mean “take it easy”.

Spoiler alert; in some areas, the charming Irish accent mixed with quick talking can be entertaining but undecipherable. The names of the villages would be ideal in a hip hop beat or a children’s story; Incheydoney, Skibbereen, Bayylydehob, Sneem, Clonakilty, Parknasilla, Tahilla and Tralee. In Gaelic form, all of them are steeped in history. 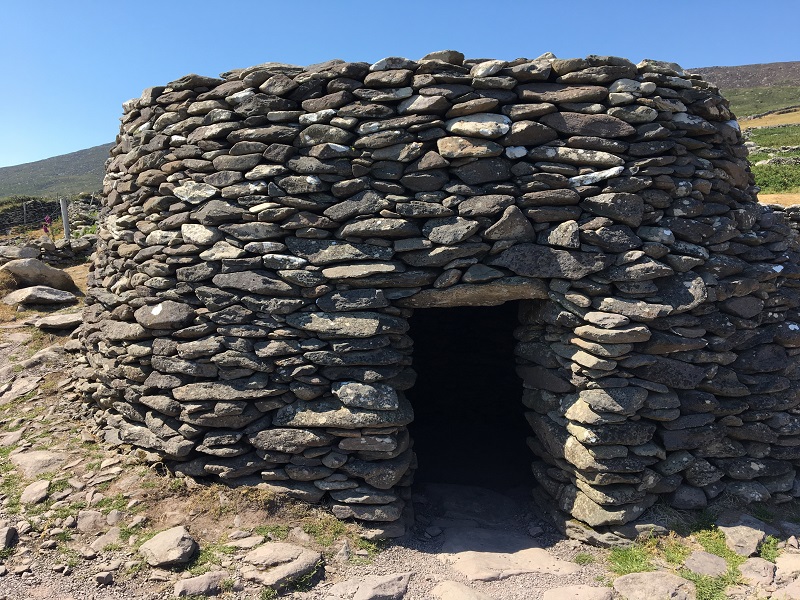 Get off the main roads, because the real Irish life is in the small villages. From the map, it is impossible to gauge the steepness of the hills, where the backroads twist and turn in precipitous coils around huge rocks or race down towards the sea. Villages are few and far between. Instead, the rocky, landscape is defined by a web of stone walls, isolated farmhouses, and the mantle of history. A ruined 1500’s monastery is ‘recent’ when compared to stone beehive huts built in 2000 BCE. Slea Head Drive on the Dingle Peninsula boasts excellent sea views on one side of the road and, on the other, Irish famine cottages, Dunbeg Fort and a cluster ancient beehive huts. Round and domed, no mortar was used to assemble the huts using local stones, each angled downward and outward to shed the frequent rains. The small site was inhabited from ancient times to 1200 AD.

Inland, the town of Killarney is a perfect base for exploring the Ring of Kerry. Killarney itself makes it easy to enjoy nature, to be laid back or active. There are leisurely strolls, challenging hikes, cycling and boat rentals. Setting out on the Ring of Kerry there are small towns edged with vibrantly coloured houses and market stalls selling everything from roasted coffee to clothing. Towards the coast, the landscape shifts to treed peaks, lush greenery, and enormous rocks dotted with pristine white cottages. The mountain chain called MacGillycuddy’s Reeks looms majestically through trees on the drive out of Killarney with the highest mountain measuring 3400 feet. At the side of the main road, there was a peat bog farm accounting for the rich scent of peat that trailed behind us as we drove. For the moderate walker, there are clearly marked walking routes, including the Kerry Way, the Republic’s longest walkway. Driving along the north coast of Iveragh, there are spectacular mountain stages that overlook the expanse of Dingle Bay, one body of water a brilliant turquoise and the other a deep bottle green. The points overlooking Dingle Bay have shallow water attracting lots of birds and birdwatchers. Use of the local slate mine is evident in picnic areas edged by slate slabs and feature picnic tables built entirely out of slate, making them theft proof. 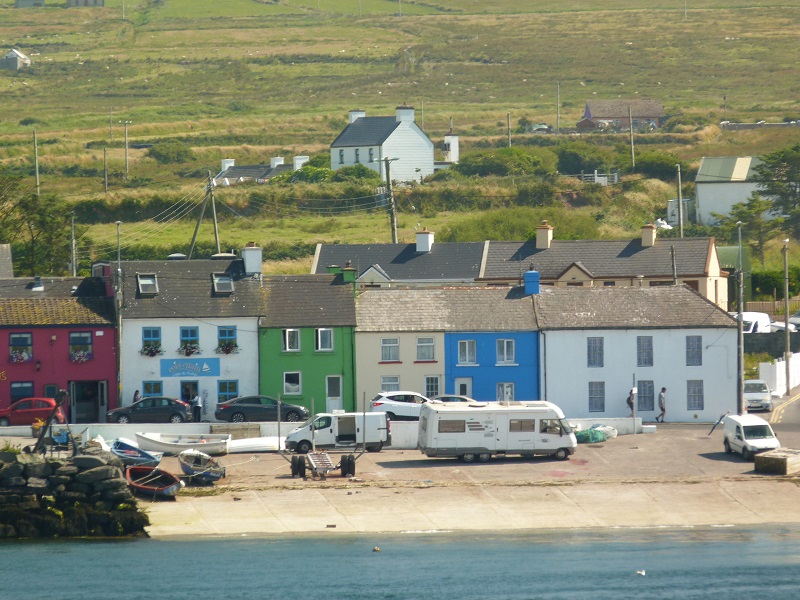 Caharsiveen, the capital of the Iveragh Peninsula overlooks Valentia Island and harbour. We wanted to see Geokaun mountain and the Fogher cliffs on Valentia. There’s a ferry from Caharsiveen, but we took the bridge at Port Magee, the first ever winner of the National tourism award, partly because of its brightly painted houses. At the highest point of Valentia Island, we stood on the edge of the Fogher cliffs towering above the Atlantic Ocean with one of the most beautiful views I have ever experienced. There are views of all of Valentia island, the Skellig islands, the Blaskets and Dingle. The sea was bluer than I had ever seen and the cliff edges were jagged like shards of broken glass. Seaspray filled the air with bracing freshness, and it felt like the ocean was engulfing me. Lookouts at various elevations, all have take-your-breath-away views. Information panels at each lookout give a detailed overview of the history, mythology, plant life and wildlife.

Port Magee is the main departure point for boat trips to the Skelligs, two tiny islands in the open Atlantic eight miles off the coast, and a UNESCO World Heritage site. The line-up for the ferry was one of the rare spots where we saw collections of tourists, all wanting to see the location for the iconic last scene in “Star Wars: The Force Awakens.”.

The view of the Skelligs from the mainland shrouds them in thin mist and mystery. Skellig Michael, the larger island, features soaring slate cliffs over 700 feet tall and is one of the great gannetries of the world with about 20,000 pairs. Perched high above the Atlantic is a well-preserved monastery from the sixth century. Explore the ruins, and for unbelievable views, climb the 618 steps following in the footsteps of the monks who took them each day. It’s advisable to book boat tours in advance judging by the crowds.

Getting to colourful Waterville, a seaside town with views, cafes and shops, took us along the curving, winding roads with coastal views that seem never-ending as we drove towards Sneem to stay in a country hotel for the night. The stretch of coast feels more remote and rural with groups of hikers and cyclists along the way. Every curve and twist of the road brings an entirely different view with long stretches of only trees and the Macgillicuddys to come back into view.

The driving highlight for us was traversing the Gap of Dunloe which is between the two highest peaks of the Macgillycuddy’s Reeks. We drove through Moll’s Gap and Ladies View to Muckross House and followed the Killorglin Road to Kate Kearney’s cottage, from which you can take pony trips through the Gap. In the valley between the peaks of the two highest mountains of the reeks, the road is narrow and isolated: we only saw four cars in an hour. But there were plenty of sheep, rocks, rivers, streams, and thatched roof cottages. Part of the road is tight, narrow and so convoluted that we lost sight of it altogether. It’s not a fast drive. With photo-stops, a ten-mile ride took nearly two hours, on a steep winding single track with pull-offs with astounding views every ten feet through very rugged countryside, revelling in the smooth ride of our BMW upgrade. Blackface sheep with long coats and horns dot the landscape. To get a portrait photo of the sheep, I pulled out my party trick, a sheep call, which they quickly respond to and besides looking directly at me, often jump over fences or other sheep to get to me. Drive a little further, and Kenmare is buzzing with buses, five-star hotels, chic spas, B & B,s, stylish restaurants, art shops, trendy cafes and welcoming pubs with live traditional music. North of Kenmare, turn a corner onto the Dingle, and you lose all habitation. It’s just you and the vegetation and the rocks. Despite very windy roads and hills, it’s a haven for serious cyclists in full lycra with yield signs embedded in their backside for clear visibility. Dingle town is a busy seaside town with an enormous beach heaving with surfers, paddle-boarders and large crowds of tourists

Opting for outdoor adventures that stoke your appetite lead to extraordinary meals, navigating through diverse eateries in even the smallest of villages. There is a focus on fresh-off-the-boat fish and seafood, local, seasonal vegetables, farmhouse cheeses, locally baked goodies, handmade chocolates, jam, and craft beers, whiskeys, and gins.

I expected beauty, but I didn’t expect a primal emotional connection to the views, the wildness, the colours of the coastline I had never seen before except in a Crayola box. There was a magical feeling about the journey and even though we were travelling six to eight hours a day, I never wanted the days to end, thinking it couldn’t be any better the next day, and it was always completely different. Even though we did the Southwest corner of it, a relatively short piece of the route, you could take up to six weeks to drive it. In terms of miles, it was a small piece, but in terms of the journey, it was a magnificent adventure.