Where to Play and Stay in Portugal: Lisbon Think of Lisbon as San Francisco’s older, cooler cousin. It has seven hills ringing a historic harbour, painted streetcars, seafood you’ll long for after you leave and a history that stretches back more than a thousand years.

In a crowded restaurant in Lisbon, as the lights in the stuccoed arches dim, the chatter and clatter of utensils stops and silence falls. A man emerges from the shadows, hands in pockets, a fedora pulled down low, and he starts to sing. It’s so rare to hear a pure, unamplified human voice these days that my heart begins to race as Ricardo Ribeiro pours his heart into the room. I am listening to Fado, songs of love and loss and joy, a genre born in Lisbon, its origins lost in time. My first night in Lisbon was spent at O Faia, a traditional Portuguese restaurant and Casa deFado (Fado house). There’s no better introduction to this city that wears its heart on its sleeve. Although Lisbon was almost entirely destroyed by an earthquake and tsunami in 1755, its history and traditions stayed strong. Some of the oldest buildings, like the Moorish Castelo de Sao Jorge (Castle of St. Jorge), are still intact. The hills are crisscrossed with narrow streets, stone staircases and streetcar tracks. Tall buildings covered in azulejos, colourful, hand-painted tiles and adorned with wrought iron balconies hug distinctive stone mosaic sidewalks called calcada. Don’t let the hills stop you; central Lisbon is compact and walkable with excellent public transportation.

Follow the north bank of the Targus River to splendid Commercio Square, filled with classical 18th-century buildings and a massive, statue laden triumphal arch. Buskers and musicians entertain on the shore while roving wine carts offer sips by the glass.  Just past the east end of the square, drop into the Conservia de Lisboa, a tiny, family-run shop that has been selling tinned seafood (a Lisbon speciality) for over 80 years. Take Rua dos Sapateiros, one of the main shopping streets, north to Rua de Santa Justa and look to the left to see the splendid wrought-iron Eiffel-inspired Santa Justa Lift. Opened in 1902, the seven-story elevator still serves as a shortcut from the street below to Carmo Square on the hillside above. An observation deck at the very top offers a panoramic view of the city. Continue north, and you’ll find Lisbon’s central square, Rossio, with its fountains, statues and flower sellers. Just to the left of the National Theatre at the north of the square is the art nouveau style Lisbon Train Station on Rua Romana. Once you’ve seen some of the sights, I’d recommend spending a day with Joao Santana Domingos of Heritage Tours for more profound insights into the art, culture and history of Lisbon. “They say the Portuguese are like mosquitos,” Joao says, “you can find them everywhere”. Beginning in the 15th century, Portuguese sailors expanded the empire to include Brazil, parts of the African coast and Sri Lanka. They were the first to venture to China and Japan and even reached Nova Scotia. The delicate columns of the Jeronimos Monastery – photo Debra Smith

Tour the massive Jeronimos Monastery, a UNESCO World Heritage site with Joao, and he’ll point out sea motifs like starfish, navigational tools and sailors’ knots combined with high Gothic architecture in a unique style called Manueline. Slender stone columns stretch high above the tomb of Vasco de Gama, the famous explorer who discovered the spice route to India, while elephants and tigers adorn other niches, symbols of the reach of the Portuguese fleet. 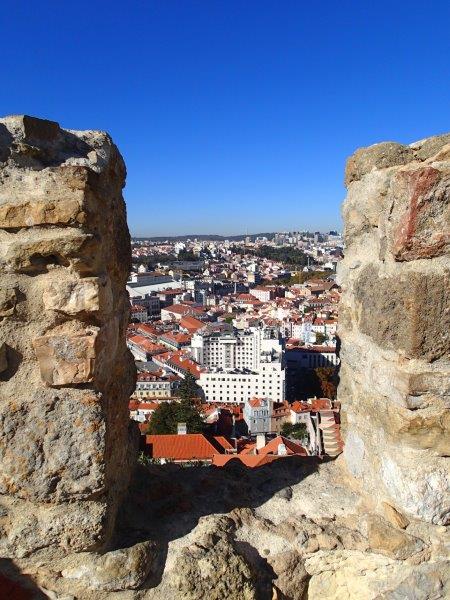 Visit the Castelo de Sao Jorge, an 11th-century Moorish castle perched at high above Lisbon. For a Game of Thrones moment, climb the ramparts of its eleven stone towers. There’s a fascinating museum and impressive views of the city from this former royal residence. On the way down Joao can walk you through the twisting streets of the Alfama, one of the first neighbourhoods of Lisbon, show you the 15th century Belem watchtower and recommend some great restaurants. With such a historic and close connection to the spice trade, it’s no wonder the food in Lisbon is so good. For a casual bite, drop in to the Time Out Market, in the Baxia-Chiado district, walking distance from Commercio Square. This light-filled renovated warehouse is lined with over 40 vendors selling everything from freshly made pasta, cheeses and seafood to pizza, steak and salad. Sample some delicious Portuguese green wine and for dessert, warm-from-the-oven custard tarts from Manteigaria Fabrica de Pasteis de Nata, arguably the best in town.

One of Portugal’s most innovative chefs, Jose Avillez combines his two Michelin star skills and El Bulli background with traditional Portuguese seafood dishes at Pateo in Bairro do Avillez. More than just one restaurant, Barrio do Avillez has something for every taste and budget: A gourmet deli with tasty charcuterie (take away or munch in) at Taberna (noon to midnight daily), plus Cantina Peruana on the second floor serving contemporary Peruvian food along with a Pisco bar. Sometimes the hardest part of planning a trip is deciding where to stay. That won’t be a problem if you make Martinhal luxury family hotels your home base in Portugal. They pay attention to every detail, from exceptional child care facilities with responsible, trained staff members to bottle warmers and potty seats. Couples without children will also find their rates affordable and the locations attractive. Their newest boutique property, Martinhal Chiado Family Suites, is right in the heart of Lisbon, close to everything the city has to offer, whether it’s a family outing on a vintage streetcar or a romantic night for two on the town.

Thirty-seven expansive apartment-style suites have tall double-glazed windows with wooden shutters that overlook Lisbon’s terracotta rooftops. The sun shines in on ultramodern kitchenettes, wood floors, white walls and soft upholstered furniture in primary colours. There are no hard corners on any of the furnishings for little ones to run into, and older kids will love the fold down bunk bed wall units. The Kids’ Club is spacious and bright, with tons of activities, games, and toys. There’s also a climbing wall.  Supervised play is available from early morning until 10 p.m. After that, caregivers will stay with the children in their apartment. No need to bring cribs, strollers, bottle sterilisers or more necessities with you. Simply contact the family concierge in advance and arrange to have them waiting for you.

Start your trip with delicious complimentary Portuguese food and wine on direct flights from Toronto to Lisbon on TAP Air Portugal. Lovely Lisbon is waiting for you with open arms.

The writer was a guest of Martinhal Chiado Family Suites and Visit Lisboa while in Lisbon. As always, her opinions are her own.