A Magical Day Aboard the Disney Magic Twenty minutes into lunch at Lumiere’s, the French inspired Beauty and the Beast restaurant aboard the Disney Magic, I settle into the pleasant hum of friends, food, and good conversation, pleasantly surprised to find myself totally relaxed on this 11-deck cruise ship. I think that’s part of the magic.

When I received an invitation to spend an afternoon aboard the 2,700-passenger Disney Magic, the flagship vessel of Disney Cruise Line, while it was on a stop in the Port of Halifax, my answer was a resounding yes.

I haven’t cruised, and I’ve been intrigued by people who rave about the experience. I wanted to see if cruising was something for me and my family.
Standing in the ship’s three-storey, art deco atrium lobby, I can say this: Disney knows how to set a scene. With a grand piano, giant portholes, elegant chandelier, and a bronze statue of ‘Helmsman’ Mickey, the vibe of the ocean liner is dreamy. Over lunch, four waiters, each from points around the globe, serve our table a sampling of appetizers, mains of swordfish, herb-crusted pork chops and penne arrabbiata, and a trio of divine desserts.

On tour, talk turns to the magic of the Magic: pirate deck parties, fireworks at sea, character meet and greets, first-run Disney movies, original Broadway quality theatre, thrills in the waterpark, and indulgence for all family members.

What was so magical about the Disney Magic?

For kids and families:

The attention to detail is outstanding. On Deck 5—the place for kids—even the ceilings are shrunk just a tad, to make the pint-size set feel right at home. Disney is all about magic and this is kid central, where nearly the entire deck is customized for younger passengers, from the It’s a Small World Nursery for those aged three months to three years, to the computers, art stations, games, and hands-on fun in Marvel’s Avengers Academy, Disney’s Oceaneer Club and Disney’s Oceaneer Lab. Watery fun. Towering atop the ship, the AquaDunk is a three-story thrill body slide that launches riders into a translucent tube (at one point it extends 20 feet over the side of the ship – hello ocean view!) as the floor opens beneath riders, sending them splashing down. Deck 9 offers the 1,800-square-foot AquaLab with jets, geysers and a tamer water slide, the Twist ‘n’ Spout. A jumbo screen on the upper pool deck makes a cool spot for movie nights. Door decorating. I dug the whimsy of folks who decorated their stateroom doors (within certain parameters) making their doors fun and easier to recognize. And I was ready to sign on just to hang a fish extender on the pewter fish mounted on the wall beside each stateroom door. Disney uses the fish clip to leave messages for guests. Guests who want take it one step further and add the extender. Rumour is they plan ahead on online boards for an exchange with other guests, leaving each other secret Santa style gifts in the extenders. Family-sized staterooms. Trust me, it’s no fun living in a world built for a family of four when you’re a family of five. I was thrilled to see staterooms can accommodate five and more, and offer such features as room under the bed for additional storage and a bath and a half. The Theatre. Disney is an entertainment company that started a cruise line, and nowhere is this more evident than in the impressive 977-seat Walt Disney Theatre that produces nightly Broadway style shows. Buzz is that Tangled the Musical is coming for the first time in November.

Dining: The Magic has three main dining rooms, which each accommodate about 400 people. Guests, and wait staff, rotate between each, dining at Lumiere’s, at Carioca’s with its lighted lanterns and Latin-themed fare, and perhaps my favorite, Animator’s Palate, with its black and white old-time animation motif. Even cooler, guests participate in the Animation Magic dinner show when characters they draw spring to animated life and join the show onscreen. 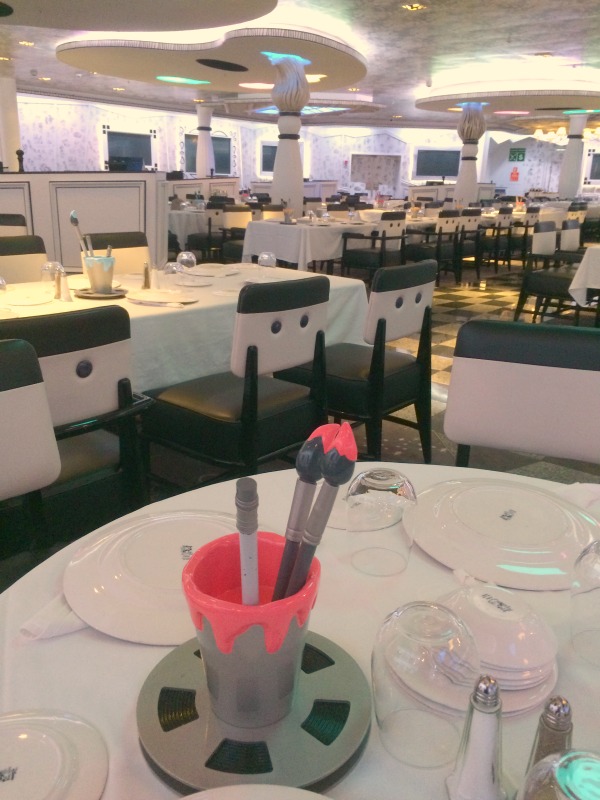 Spaaaaaa Time. Disney? Frenetic? Not here in Senses Spa & Salon. We stepped into a little oasis where I definitely wanted to linger, perhaps book a pedicure, enjoyed in chairs positioned to overlook the sea. The Deck 9 spa offers nearly 11,500 square feet, and indulgences including suites for couples massages and pedicures. A fitness centre is also nearby.

Craving adult time? Look no further than Deck 3. It’s home to a variety of options including After Hours, the nighttime entertainment venue for dancing, comedy, and music; Keys piano bar and lounge; and O’Gill’s Pub, an Irish pub and sports bar. For a romantic tête-à-tête, we hear (though we did not eat here) that Palo’s, the adults-only modern Italian restaurant, while an extra charge, is very much worth it.

Quiet Cove Pool (the name, perhaps, is a tip-off) is the adults-only pool, in you got it, a quiet ‘cove’ area.

While I was only on board for the afternoon, my verdict? Watch out AquaDunk! I’m up for a family cruise after all.