Beyond being merely photogenic, the Kidston Island Lighthouse marks the entrance to Baddeck Harbour. The grand house in the background is Beinn Bhreagh, summer home built by Alexander Graham Bell and his wife Mabel, and enjoyed by many of their descendants.

As the ocean breeze fills the sails of the schooner Amoeba and she heels to one side, I brace my feet against the rail and drink in the crisp salt air and incredible coastal scenery surrounding us on all sides. The stark white and red of the Kidston Island Lighthouse stand in bright contrast to the browns and greys of the area’s most famous home – Beinn Bhreagh – perched high on a nearby cliff. Variegated green foliage and deep blue ocean waters, topped by whitecaps, round out the vista. I’ve only been in Cape Breton for about a day, but I’m already sure of one thing… the most northern part of Nova Scotia is one colourful place! The rugged east coast of Cape Breton Highlands National Park, as seen from a hike in the Black Brook Cove area. 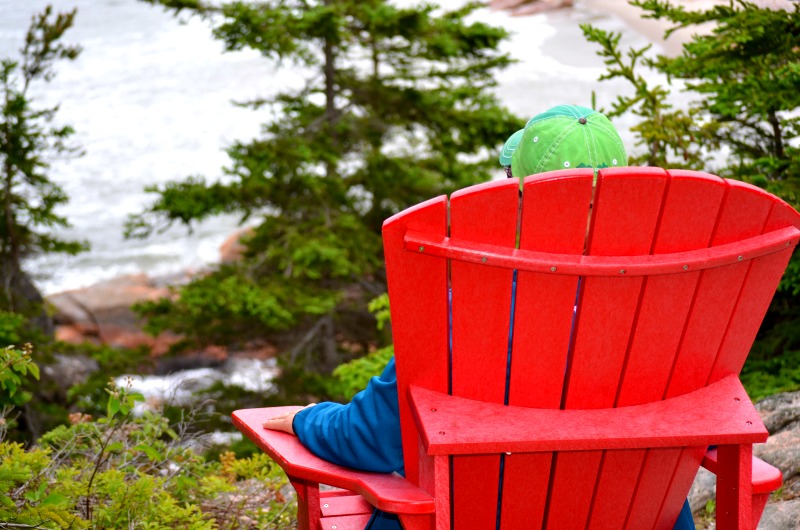 A hiker rests her feet and soaks in the view from one of Parks Canada’s iconic red chairs, in Cape Breton Highlands National Park. Ready for adventure, paddles at North River Kayak Tours await visitors who want to explore St. Ann’s Bay on guided paddling tours, ranging from half a day to 5 days long. Perfectly situated for grand vistas of land and sea, these rocking chairs at the Castle Rock Country Inn in Ingonish invite visitors to stop and stare awhile. Parts not yet travelled: overlooking a small section of the Cabot Trail, the scenic highway that circumnavigates Cape Breton Island. While you could make it the whole way around in one day, you’d be missing out on many great things to see and do. Taking at least 3 days to make the trip is a far better plan! Le Centre de Mi-Carême, located between Margaree and Cheticamp, tells the story of the Acadian Mid-Lent Festival through vibrant displays of masks and costumes, demonstrations of music and dance, plus classes in mask-making, dance and traditional songs. During our June visit, lupins were in bloom across the island, adding an extra splash of colour to the landscape. Gaelic culture is alive and well in Cape Breton, thanks in large part to the cultural programming and language instruction available at the Gaelic College, where these (and many other) clan tartans are on display. Fresh off the boat (and from the sea) in Grand Etang Harbour, this lobster is already a beautiful colour, though it’ll turn a much brighter hue in the cooking pot. Although lobster is often served whole, with drawn butter, this succulent crustacean does make its way into many other dishes, such as this lobster-topped poutine at Island Sunset Resort in Belle Côte. Beer tasting on the lake-view screened patio at Big Spruce Brewing is a feast for all the senses. The gorgeous pink brew on the right is a seasonal sour raspberry wheat beer, “The Silver Tart”, inspired by Alexander Graham Bell’s working notes. Boats are an important part of life on any island; these colourful vessels are moored in Baddeck. Sentries and officials greet visitors at the entrance of the Fortress of Louisbourg National Historic Site. The fortress represented is circa 1744, and therefore these inhabitants are French, not British. As daylight wanes, a lone sentry stands watch on the wall at the Fortress of Louisbourg.

Following just one brief trip to Cape Breton Island, these are the memories that stand out for me: fiddle music, step dancing, fresh seafood, salt air, wildflowers, history, friendly islanders, outdoor adventure and, of course, colour!