The highway wound, curved and slipped through the forest. It was a grey day on the Oregon Coast, as clouds sat low on the trees and ribbons of mist curled around the branches. Through the occasional opening, we were tantalised by glimpses of the ocean. The misty day served to accentuate the mystery and power of the coast. This coastline was why I came. The long lines of waves rolling towards the beach, sea life, and craggy outposts of rocks create the spectacular coast for which Oregon is famous.

Of course, I really only had a few moments to contemplate the beautiful scenery, before a territory war broke out in the back seat and then someone had to go to the bathroom. My husband and I were unexpectedly fulfilling a long-held ambition to drive along the Oregon coast. I never assumed it would actually happen, but here we were, driving through magnificent scenery with each other, and three kids in the back of a minivan.


The Oregon coast was as amazing as I had hoped. The three days we spent in Oregon weren’t long enough, of course, but now we have three great reasons to go back.

The Cape Perpetua Scenic Area is a forested headland rich in scenery and unique outcroppings along the ocean. It’s part of the Siuslaw National Forest and offers both towering, old-growth trees and frothing surf. Cape Perpetua, named by Captain James Cook in 1778, boasts such picturesquely-named formations as Thor’s Well and Devil’s Churn. These rock formations can be an impressive place to watch the waves as the tide rolls in and out.

Starting at the Cape Perpetua Visitor Center and armed with a map, we walked straight for the tide pools, as low tide was approaching, before heading up the hills. It was an exciting time of discovery for an ordinarily land-locked family. We even saw a grey whale spouting, thanks to a fellow wanderer who pointed it out!

We loved wandering the beach at low tide, searching tide pools for sea life. We managed to time it perfectly to see the tide pools at Cape Perpetua, which offered a sea life extravaganza. We found starfish, sea urchins, mussels, and sea anemones. Cape Perpetua was the only place we saw a whale, but apparently, there are many whale-watching locations all along the coast.

The day after Cape Perpetua, we found ourselves in Newport, where sea lions congregate. We could hear and smell them, long before we saw them. Several locals we chatted with suggested a visit to the Hatfield Marine Science Center, associated with the Oregon State University and free with a donation. (The Oregon Coast Aquarium is also in Newport.) Due to budget and time constraints, we opted for the small Science Center and spent a delightful couple hours exploring. With interesting exhibits and hands-on displays, we learned more about marine science than we had planned.

The brilliant orange octopus that greeted us when we walked in was captivating. But my favourite was a big “petting” tide pool. Rocks, water, and sea life were displayed in a natural way with a knowledgeable guide nearby to tell you all about it. It was great exploring the tide pools in the wild, but it was helpful to visit the Science Center and learn more about the creatures and how they live. Plus, it was so much fun to be hands-on.

The guide showed us how to touch the sticky anemones and how to receive a sea urchin hug. The kids also enjoyed the tsunami simulation where they built small LEGO buildings to see if they could withstand the waves.

How to get a sea urchin hug. Photo Credit: Charity Quick

The romance and history of Oregon’s many lighthouses are almost better than the tide pools. (How do you choose?!) The Yaquina Head Lighthouse, north of Newport, juts nearly a mile into the Pacific Ocean at the Yaquina Head Outstanding Natural Area, where you’ll find hiking, tide pools, and the tallest lighthouse in Oregon.

It was pouring rain on the day we visited Yaquina Head Lighthouse. Plan ahead, for you can book a tour of the lighthouse and climb the stairs to the top! With the rain, being inside seemed just right. The day before had been clear, and grey whales had been spotted breaching off the coast. We arrived a couple of hours early, and opted for a dry morning inside the interpretive centre, exploring the many interesting exhibits. Our middle-school aged kids were entertained by the informative video and kid-friendly displays. They enjoyed playing with toys that lighthouse kids 100 years ago would have played with and dressing up as a lighthouse keeper’s family.

Dashing through the rain to the lighthouse, it was finally time for our tour. There has not been a lighthouse keeper at Yaquina Head since 1966, but the light has been continuously active since 1873. Even the kids were interested in hearing that the walls at the bottom of the lighthouse are 5 feet thick, the marble floor imported from Alaska, and the light flashes a distinctive pattern to tell ships where they are. We learned how the keeper’s family lived and then climbed 112 of the 114 steps to the very top, where the wind dashed rain against the windows and obscured our view. 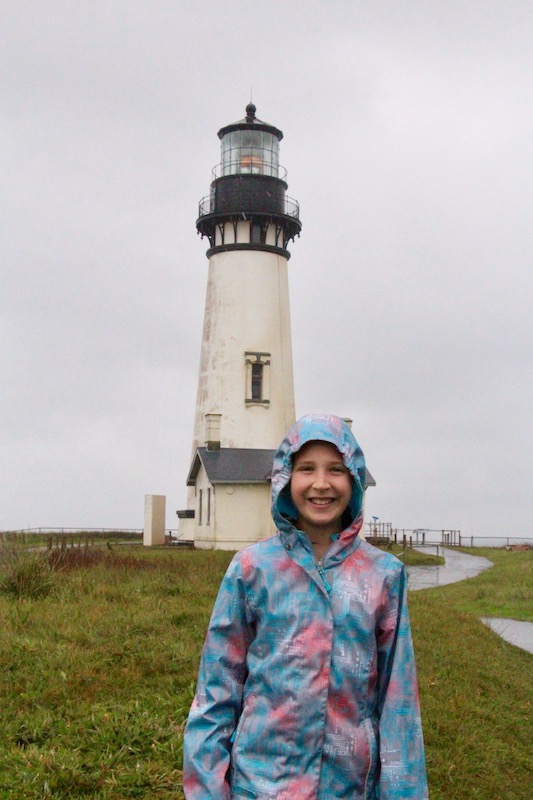 While the weather caused us to miss the hiking, tide pools, and a fantastic view at the Yaquina Head Natural Area, it also highlighted the importance of lighthouses along the coast, and helped our imaginations see life there 100 years ago!

Rain or shine, we loved the Oregon Coast. Its rugged beauty offers enjoyment for the whole family. It swept us away and left us sorry to leave. Oregon really is magic.