Unspoiled Beaches, History of Flight, a Lost Colony and So Much More in the Outer Banks North Carolina 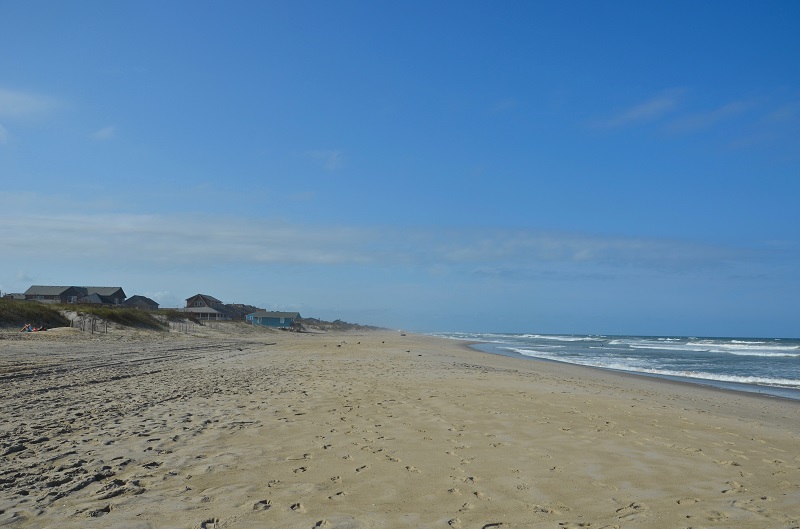 Crossing the Virginia Dare Memorial Bridge connecting the mainland to the Outer Banks, a group of barrier islands strung across 160 kilometres of North Carolina coastline, we revel in the solitude a September visit affords. At Nags Head, we kick off our shoes and head north along the shores of the Atlantic Ocean on a somewhat deserted swath of sand toward the Nags Head Fishing Pier to enjoy a pre-dinner cocktail, and I think “this is the attraction.”

Canadian windsurfers have been heading to the OBX since the 1970s, attracted by its unspoiled beaches, and excellent water and wind conditions, a fact so well known that the public beach fronting on the sound between Avon and Buxton on Cape Hatteras Island is referred to as the “Canadian Hole.” However, during our visit, a few short weeks after Hurricane Dorian, Cape Hatteras and Ocracoke Island are pretty much inaccessible, and the water is off-limits to those not used to dangerous rip currents, leaving us to discover everything from Currituck Banks to Bodie Island. You can’t miss The Wright Brothers National Memorial highlighting siblings Wilbur and Orville Wright who successfully flew the first powered airplane here at Kitty Hawk, N.C., on Dec. 17, 1903. At the visitors centre dive into problems the self-taught mechanics from Dayton, Ohio solved, view a replica Wright Flyer and learn about other pioneers of aviation. Outdoors, follow the flight line of the brothers’ four takeoffs, marking the distance from the first flight boulder; and soak in the view from the monument atop Kill Devil Hill.

Head to the tallest living sand dune on the Atlantic coast, Jockey’s Ridge State Park for a hang-gliding experience, or to fly a kite, do some sandboarding, watch the sunrise over the Atlantic or set on the Roanoke Sound, and learn about dunes. Feeling more adventurous? Take a 30-minute Oregon Inlet tour in a Cessna 172 or a biplane with certified flight instructor Jenny Hawk (yes that’s her real name) at OBX Airplanes. You’ll get an overall view and some great aerial photos of Bodie Island Light Station, the Wright Brother’s Memorial, Jockey’s Ridge and the beach. Up to three passengers can fly for US$149. Climb the 200 steps inside Bodie Island Light Station and see the view from the top of the third lighthouse built on the island  (completed in the 1870s). After navigating the narrow, wrought-iron staircase to the top, enjoy sweeping views of the ocean and sound where, if you’re lucky, the park ranger will let you take a peek at the first-order Fresnel lens, which is still guiding ships past the treacherous Graveyard of the Atlantic just offshore. Bodie Island Light Station in the Outer Banks, N.C., still casts its light on the Graveyard of the Atlantic. Photo/Nancy Truman

Manteo (pronounced Maneo) on Roanoke Island is not only the county government seat but also the first settlement. In town, visit the Roanoke Island Maritime Museum, which encompasses the Roanoke Marshes Lighthouse, one of several screw-pile lighthouses built in the 1800s to help boats navigate North Carolina’s trafficked rivers and sounds; a restored U.S. weather tower that still uses signal flags to inform boaters of weather conditions; and an exhibit on early commercial fishing and boat building in the George Washington Creef boathouse. At the 10-hectare Roanoke Island Festival Park across from Manteo waterfront, discover the first English settlement in America through interactive exhibits and a nightly performance of The Lost Colony, a symphonic re-enactment of the founding and disappearance of the 117 English men, women and children who came ashore here in 1587. Climb aboard a replica of Elizabeth II, one of the seven English ships that set out from England, help set the sails, plot the course and swab the decks. Outerbanks Distilling Company – a craft distillery located in a historic brick building in downtown Manteo – produces Kill Devil Rum, a name inspired by tales of plundered barrels of rum from the ships lured to the shallow shoals near Nags Head being stored at nearby Kill Devil Hills. Tours and tastings are available, but if you’ve got the kids along, you might just want to pick up a bottle of Kill Devil Pecan Rum distilled with local honey and pecans and it’s by-product — rum-soaked pecans baked with brown sugar and cinnamon — to enjoy at a later date. Duck Trail boardwalk is the place to go for eclectic gifts, ice cream and a spectacular sunset. Photo/Nancy Truman

The Town of Duck is a resort town named by hunters who have flocked here since the 1800s for the abundant waterfowl. It’s also home to the Duck Trail — a boardwalk running the length of the town along the Currituck Sound —  where you can shop for locally made, eclectic gifts, dine al fresco or grab a double-scoop ice cream cone at Sunset Ice Cream and Coffee and watch the sun go down.

To plan your vacation go to https://www.outerbanks.org/

The writer was a guest of the Outer Banks Visitors Bureau. They did not review this story. Nancy Truman is a freelance travel writer based in Toronto. While employed as a business editor at National Post, she had the opportunity to turn a passion for travel and photography to writing travel features. Her pieces have appeared in the National Post, Vancouver Province and other Postmedia titles, and in Bold Magazine. She likes to write about food, wine, history and culture, and where ever possible share the stories of people she meets on her journeys.