A long, long time ago, a single, sassy gal strutted through the streets of New York. Giddy with the excitement of being in the big city on her first real business trip (OK, it was a trade show, but whatever), she was thirsty for adventure. Wandering through a dense sea of souls sandwiched between office towers and hot dog carts, a strange feeling washed over her. Alone and somewhat lost in the concrete jungle of Midtown Manhattan, she felt… alive. Yes, alive! The palpable energy in the air, the charming construction workers who inquired as to how she was doing, it was all so fresh and flattering. And do you know what thought popped into her head and stayed with her that entire trip? “I am so coming back here!” she avowed.

Here’s a look at the best bites of the Big Apple as devoured by me (still sassy) and my girl.

When you’re in a culture capital, you’re pretty much guilted into visiting something enlightening. Though it may seem like a drag, visiting MoMA is anything but. I was worried it would be a major snoozer, but was delighted to find a wide range of art from Van Gogh’s Starry Night to Andy Warhol’s soup cans to Jackson Pollack’s whatever the hell you call his splatters. The best part? The gift store is out of this world with loads of toys to tempt curious tots. Unleash your inner Liz Lemmon and spend the day around 30 Rock. At this time of year the infamous tree is lit up and you can have a romantic moment skating at their outdoor rink – but don’t bother. It’s super expensive and the rink is microscopic for us Canadians. Far better to occupy yourself with the shops and cafes situated around the plaza. Steer yourselves towards the Lego store, where kids can build three mini figures for $10. If you don’t get a chance to visit MoMA, they have a gift shop here with a fantastic kids section brimming with toys, books and games.

Sightseeing works up an appetite and Bouchon is ideal for soup and sandwiches. Magnolia Bakery (they’re responsible for the whole cupcake craze) also has a small outpost with decadent pies and cupcakes.

Right around the corner is Radio City Music Hall, where you can catch the Rockettes and their legs in action. And a mere two blocks away is American Girl Place, where if you’re not careful, you just might drop a mortgage payment in under an hour, as one reckless mama with a maxed out credit card can attest. Glimpse that racket here.

It was here I, former trade show titan and one time wearer of 26-inch waist Hudson jeans was schooled by my daughter. “C’mon! Keep moving, we look like tourists!” she admonished, as I stood jaw gaping at the splendor of Times Square. Too late, we were spotted! Swarmed by action figures, we had little choice but to dole out some crumpled George Washingtons in return for an obligatory photo opp. For sure you’ll spot lots of flagship stores like M&M’s World, but if you’re pressed for time, give it a miss and head to Hershey’s Chocolate World, where they are much more generous with the samples. A few blocks away is the new Cake Boss Cafe, a worthy stop if you’re as big of a fan as we are.

The mother of all candy stores, Dylan’s Candy Bar is a psychedelic sugar high that appeals to all ages. Packed to the rafters with penny candies, chocolates and all manner of confectionary, there’s an impressive nostalgia candy selection in the basement (candy cigarettes, anyone?) and plenty of products to make sweet freaks swoon. Cap off your visit by saddling up to the Candy Bar (without the ankle biters) for spiked milkshakes or dine at the Candy Cafe for a surprisingly healthy meal. Celebrity trivia: Dylan is Ralph Lauren’s daughter and Bethenny Frankel held Bryn’s third birthday party here.

The sugar rush continues one block away at Serendipity 3, the tiny cafe famous for its frozen hot chocolate. Rich and decadent, we couldn’t lap it up fast enough. Taking a cue from soon to be parents Blake and Ryan, we also tucked into a hot fudge sundae to complete the experience. Who wants to wear size 26 jeans, anyway? Around the Empire State Building

It’s iconic, impressive and the views are out of this world. Too bad getting to the actual observation deck at the Empire State Building is such a bitch. Despite no lines, it took us at least 15 minutes of hoofing it through a maze brimming with boring building factoids in order to reach the main deck on the 86th floor. Once on the viewing platform, it’s awesome, but can be chilly and mildly annoying if you happen to hate other tourists.

Right across the street is Macy’s department store. It’s worth popping in for a few reasons. First, it’s super old. Head up to the kid’s section on the 7th floor so you can take the old fashioned wooden escalator all the way down. Second, the deals are great. Fancy girl’s party dresses for $14? Sold! Third, there’s public washrooms and a restaurant on site. The Sheraton Times Square is in an enviable location smack dab between Times Square and Central Park. A major reno was just finished last year, so all 1700 rooms look brand spanking new. Rates from $199 in low season (winter) and $279 during high season.

Mama and little lady also spent a few nights at the Westin Grand Central, also in a fab location mere blocks away from Grand Central Station and the Chrysler building. At 310 sq ft, the hotel offers some of the largest guest rooms in the city. Rates run from $199 in low season, $299 in high. Tip: If landing at LaGuardia, take the NYC Airporter shuttle bus to Grand Central Station. It’ll drop you off across the street from the hotel for only $14.

We used The New York Pass to get into attractions like MoMA and the Empire State Building. Also helpful for planning our trip and snagging deals was NYCGo.

PS. If you want to spice things up consider a sexy couple’s trip to New York. 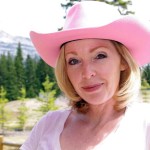 Jody Robbins is an award-winning travel writer with bad hair, a potty mouth and a serious case of wanderlust. Check out her lifestyle blog www.travelswithbaggage.comor her musing on Twitter @Jody_Robbins.