6 Ways to Get Your Adventure Fix This Summer in Flagstaff, Arizona In its heyday, Flagstaff was a popular stopping point for road trippers travelling the iconic Route 66. Then along came the interstate highways, which effectively slowed down tourism and business travel on this popular route. But this cool, unpretentious mountain town is making a comeback. Sitting at 2,135 metres in altitude, the area is an adventure lovers’ paradise and offers the perfect summer climate for hiking, mountain biking and enjoying the outdoors. Using Flagstaff as your base, you can explore the high desert, the largest contiguous ponderosa pine forest in the world, aspen forests, barren tundra and several national parks and monuments. American indigenous cultures also have a rich history here, and Flagstaff has its own lunar legacy.

At the end of your daily adventures, you can head back to the comfort of the city to kick up your feet, drink local beer and eat forest-foraged cuisine. Here are six reasons to put Flagstaff on your summer travel-list. Learn About Astronomy at Lowell Observatory

2019 marks 50 years since the giant leap for all mankind, and all of the astronauts who walked on the moon trained in Flagstaff thanks to the Lowell Observatory, an astronomical research facility that provided instrument development and lunar mapping for the Apollo missions. The discovery of Pluto took place here, and the centre is involved with the New Horizon spacecraft that is currently en route to the dwarf planet.

During the day, explore the Observatory’s 125-year history and current research by joining guided tours, and in the evening, you can look through telescopes and experience interactive live presentations in the mini-planetarium. Flagstaff’s other astronomical claim-to-fame is that it in 2001 it became the world’s first International Dark Sky City. Get Otherworldly at Meteor Crater

A 40-minute drive to the east brings you to Meteor Crater, the world’s best preserved (due to the region’s low precipitation) meteor impact site and first proven meteor crater on earth. According to Jeff Beal, spokesperson for the Meteor Crater Visitor Center, a 4.5 billion old meteorite struck here about 50,000 years ago.  Although the meteor was estimated to be only 45 meters in diameter, it hit with an impact energy of more than 20 million tons of TNT.

Meteor Crater is also part of Flagstaff’s lunar legacy. Due to the crater’s similarity to the moon’s surface, all of the Apollo astronauts trained here, using lunar rover vehicle simulators to practice picking up specimens.

The Visitor Center offers an educational experience for the whole family, with educational films, artifacts and exhibits and a brand new 4-D immersion ride (your kids will love this, as the chair rocks, vibrates and blasts wind to simulate the experience).  And don’t miss the rim tour—a guided hike that takes you to observation points along the rim for an up-close look at this incredible phenomenon. Go Back in Time to Ancient Civilizations

At the Museum of Northern Arizona, founded in 1928, you can learn all about the numerous tribes of Native Americans indigenous to this region. Home to 5 million artifacts, at the museum you can also learn about the geology of the Colorado Plateau region (which is why Flagstaff is so much higher in altitude than the south part of Arizona), and view permanent and temporary art exhibits with an indigenous theme.

Next, make the drive through the scrub brush, cacti, and red rock formations of the Navajo Nation to the Hopi Reservation. At First Mesa, you can visit Walpi Village, an ancient Hopi settlement, established around 900 AD, perched high above the town of Polacca. The stacked houses, built with hand-trimmed sandstone and earth, blend so well with the environment, that you can’t see them from the town below. Tap Into Nostalgia on Route 66

Pull up your retro music playlist and channel your favourite Grease character, as you check out Flagstaff’s section of Route 66 memorabilia. Lovingly referred to as the Mother Road, this cross-country highway from Chicago to LA was the primary route for those settlers migrating west to escape the dust bowl. Pick up a brochure at the Flagstaff Visitor Centre, for a self-guided walking tour to see the left-over iconic buildings and neon signs like Motel Monte Vista. As you wander, you will also find out that Flagstaff has tons of unique shopping, restaurants, breweries, art galleries, sports shops and Native American craft shops. Get Out in Nature’s Playground

There are more than 80 kilometres of non-motorized trails within Flagstaff itself, and with its location next to the San Francisco Peaks, Flagstaff is a year-round outdoor playground. The western slope of Mount Humphreys, at the height of 3,850 metres is home to the Arizona Snowbowl ski resort (you can see the red rocks of Sedona and the south rim of the Grand Canyon from the lifts).  In the summer there are 30 hiking trails here, like Humphreys Trail, a 14.5-kilometre round trip hike through forests, lava flows and some steep-ish rock sections—but the views from the top are worth it. Check Out the National Monuments

The land formations around Flagstaff are stunning, with seven National Monuments within easy driving distance. Like Wupatki National Monument, where you can check out the red rock walls of pueblos that were inhabited until about 1,000 AD.  Take the 56-kilometre scenic loop from Wupatki to see the volcanic lava flows and blackened cinder of Sunset Crater, the youngest volcano on the Colorado Plateau (erupted 900 years ago). Further south is Montezuma National Monument, where you can visit one of the best-preserved cliff dwellings in the United States, a high-rise limestone ruin with five stories and 19 rooms, in a pastoral setting next to Beaver Creek.

Are you up for an Arizona Road Trip? Plan ahead to make it a success with these tips on surviving a family road trip! 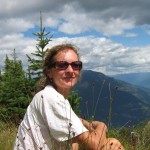 Kate Robertson is an award-winning travel journalist who contributes to many popular Canadian and US outlets. Kate's happy to call British Columbia's beautiful Kootenay Mountains home, and when she's not travelling on assignment, she loves to see what kind of fun she can get up to with her two adult sons. Follow Kate's travels on Instagram @kateflysolo101 or Twitter @kateflyingsolo, or visit her website at katerobertson.ca