In and Out of The Loop in Chicago Have you heard of “The Loop”? Many of Chicago’s must-see sights are found in this eight by five block area in the heart of downtown – including the Theatre District. Enjoy everything from current Broadway hits to spirited revivals during 2019’s celebration of The Year of Chicago Theatre.  Venture outside The Loop to find a magical speakeasy, a giant illuminated Ferris wheel and authentic deep-dish pizza.


In The Loop – A Walking Tour

Just south of Millennium Park, where the bean-shaped Anish Kapoor sculpture Cloud Gate reflects the sky, twin stone lions guard the stately Art Institute of Chicago. One of the top attractions featured on CityPASS Chicago, the AIC houses one of the world’s great collections of Impressionist, European and American art. Don’t miss the Thorne Miniature Rooms on the lower level. Kids and adults alike will be fascinated by these doll-house-size models of meticulously researched and recreated historical rooms. You may even run into Wes Anderson, the film director. He’s a fan. Walking north towards the river you’ll find the newly opened Chicago Architecture Center. In the Skyscraper Gallery, 23 models in the Building Tall exhibition tower over visitors, even at 1:91 scale. Five models feature buildings that were, in their time, the tallest building in the world including: The Home Insurance Building, (the world’s first modern skyscraper built in 1885 in Chicago); the Chrysler Building in New York; the 108 story Willis Tower (the original is just a few blocks away); the twin Petronas Towers in Malaysia and the soon to be completed Jeddah Tower in Saudi Arabia (over 1,000 meters). On the main floor is an interactive 1:50 scale model of downtown Chicago, the world’s largest 3D printed mini-city. Push a button to make the LED lights flicker over the streetscape to recreate the Great Chicago Fire of 1871 and illuminate modern landmarks.

The CAC also offers over 85 different walking tours of Chicago, and a superb 90-minute docent narrated river cruise. As the open top boat First Lady ducks under many of the 37 moveable bridges that lace up the shining Chicago River, you’ll hear the backstories of iconic Chicago buildings and the biographies of architects like Louis Sullivan, Frank Lloyd Wright, and Mies van der Rohe. Learn how to trace the rise and fall of business empires by their buildings, and discover how and why the Chicago River was engineered to flow backwards from Lake Michigan in 1900 – another Chicago first.

Hungry after your walk? There are great dining options in The Loop. For everything from poke to empanadas, pull up a chair at one of the long farmhouse tables in the casual Revival Food Hall. It’s set in a restored 1907 Daniel Burnham building. At The Dearborn Tavern snuggle into a vintage-inspired leather booth and let sisters Amy and Clodagh Lawless give you a warm Irish welcome as you enjoy their delicious, reimagined American classic dishes like John Dory fillets, rabbit tagine and Midwest fried chicken. 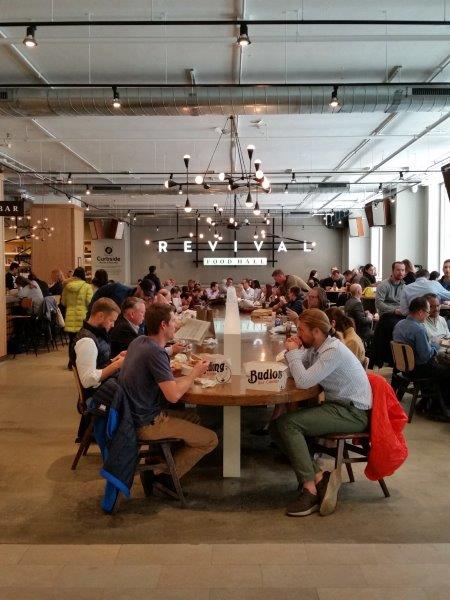 After dining, take your pick from performances in the Theatre District. Check out Broadway in Chicago’s website for tickets to the hottest shows like Kinky Boots, Dear Evan Hansen (February 12 to March 10, 2019) and the outstanding production of Hamilton (running until July 21, 2019). Chicago Theatre Week, an annual event, offers value-priced tickets for a week each February to a myriad of productions including (in 2019) Mama Mia and Little Women. With over 250 theatres in Chicago that present comedy, improv, dance, opera, puppetry and music from gospel to global, there’s always something entertaining on stage. “A lot of the work is being done by playwrights from very diverse backgrounds who are focused on reaching a wider audience”, says Deb Clapp, Executive Director of the League of Chicago Theatres.

Neighborhoods North of The Loop

Venture north of the Chicago River and you’ll find vibrant neighbourhoods with an amazing array of unique venues.  Just across the river is Streeterville, home of the 60 metre (200 ft) tall Centennial Ferris Wheel (a Chicago invention) on Navy Pier. The Chicago Children’s Museum and Chicago Shakespeare Theatre are also located here and both offer boatloads of children’s programming.  Shop your way along the upscale to bargain-filled stores of the Magnificent Mile before heading up to Old Town for a night of comedy improv at The Second City or a musical at Porchlight Music Theatre. For a truly magical evening, pop in through the “laundromat”, that hides the entrance to the Chicago Magic Lounge, and a night of close up sleight of hand, music and laughter. Watch cards disappear and cocktails appear with equal ease in the Art Deco Performance Bar, then join the magicians in the Harry Blackstone Cabaret. They’ll perform astounding feats at your table while you enjoy tasty small plates and the house jazz band. The magicians in the private 654 Club room have even more tricks up their sleeves. If you’ve been craving deep dish pizza, you’ll find it at the spacious, taverna-style Labriola Cafe, along with other Italian specialties. For dinner with a view, try River Roast Social House.  James Beard award-winning Chef Tony Mantuano’s team will dazzle you tableside with their carving skills and culinary chops. Enjoy a glass of wine while you watch the river traffic float by. In a prime location, within walking distance of The Loop, the Riverwalk and the Magnificent Mile, Loews Chicago Hotel offers excellent city and lake views, modern luxury and a family-friendly atmosphere. Kids receive an Urban Explorer backpack with the Loew’s Loves Kids program or a soft camping tent and hot chocolate with winter packages.  The hotel’s impressive architecture rates a mention on the Chicago Architecture Center’s River Cruise tour.  Start your tour of “the windy city” at the ETA Restaurant + Bar with a menu that far exceeds routine hotel fare. Inspired by Chicago’s history, Executive Sous Chef Matt Lange has put together a locally sourced menu that will have you coming back for more.

The writer was a guest of Choose Chicago. As always, her opinions are her own. For more photographs of Chicago, follow her on Instagram @where.to.lady