Canada’s Olympic Cities: Then and Now, Plus How to Visit

As Rio de Janeiro puts the finishing touches on their venues and plans for the 2016 Olympic Summer Games (August 5-21, 2016) and some of the world’s best athletes conclude years of training in anticipation, we’re remembering Canada’s own Olympic games.

Over the past 40 years three Canadian cities have had the honour (and the challenges) of hosting the world’s Olympics games. In fact, summer 2016 marks the 40th anniversary of the first Olympics ever held on Canadian soil! Here’s a look at some of the plans, politics, highlights and legacy of each Canadian Olympic games. The next time you visit Montreal, Calgary or Vancouver, be sure to visit one of the resulting Olympic structures and venues! Canada’s only Summer Olympics was held in Montreal in 1976, after the city beat out Los Angeles and Moscow to win the bid. The biggest political news of the games was the withdrawal of 25 African nations, following the IOC’s refusal to ban New Zealand for maintaining active sporting ties to South Africa during apartheid.

Unfortunately for Canada’s athletes, the ’76 games was also notable as the first (and only) time a Summer Olympic host nation failed to win a gold medal. Canadians did, however, take home 5 silver and 6 bronze medals, ending up 27th (out of 92 nations) in the medal standings. Although the Olympic Stadium was intended to be the premiere legacy structure from the 1976 games, its enormous cost, never-fully-functional retractable roof and loss of its two major tenants (Montreal Alouettes and Montreal Expos) have left it with a somewhat tarnished reputation. The stadium does still host many sporting and concert events; it has a whopping 56K seating capacity! The adjacent Montreal Tower (which was actually completed after the games) is the world’s tallest inclined tower (at 165 metres) and well worth a visit for its excellent view of the city. It’s accessed via a glass-encased funicular that kids will love! Feel like a family of champions, with a swim – where medals were won and new records set – at the Sports Centre at Parc Olympique. Also located at the Parc Olympique, Espace Pour La Vie Montréal is home to four popular family attractions:  the Biodôme (housed in the games’ velodrome and offering an immersive experience in 5 distinct North American climates), Botanical Garden, Insectarium and Planetarium. You could easily spend a whole day (or two) exploring these!

Canada’s first Winter Olympics was held in Calgary and Kananaskis in 1988, after the city’s 4th bid attempt beat out cities in Sweden and Italy. Despite being one of the most expensive winter games ever held, a canny organizing committee managed to produce a net surplus that has been used to maintain the games’ remaining facilities and secure the area’s position as a hub for winter sports athlete development in Canada.

Playing on both the winter theme and Calgary’s western heritage, Hidy and Howdy, twin polar bears sporting western outfits and cowboy hats, were the lovable official mascots of the games. Wondering how we did? Canadians athletes won 2 silver and 3 bronze medals, ending up 13th (out of 57 nations) in the medal standings.

Fun fact: the ’88 Olympics were home to some intriguing real life events that have led to two feature films: Cool Runnings, about the first-ever Jamaican bobsleigh team and Eddie the Eagle, which features the story of England’s tenacious underdog ski jumper. The half pipe at Canada Olympic Park, with a ski jumping tower in the background. Photo courtesy Visit Calgary.

Lots of Calgary (and area) facilities remain from the Olympics. Nakiska, purpose-built for the downhill ski events, is now a popular family ski destination, just over an hour from the city. Similarly, the Canmore Nordic Centre, constructed for games’ cross country and biathlon events is now a year-round sporting destination and training facility in Kananaskis Country. Right in Calgary, take a picnic (or your skates, in winter) to Olympic Plaza (where the medals were awarded in ’88), go skating at the Olympic Oval and or take in one of the many summer or winter sports and activities on offer at Canada Olympic Park (Winsport). You’ll see the ski jumps that Eddie made famous (and vice versa!), plus you can learn all about – and virtually participate in – our nation’s sporting history at Canada’s Sports Hall of Fame. 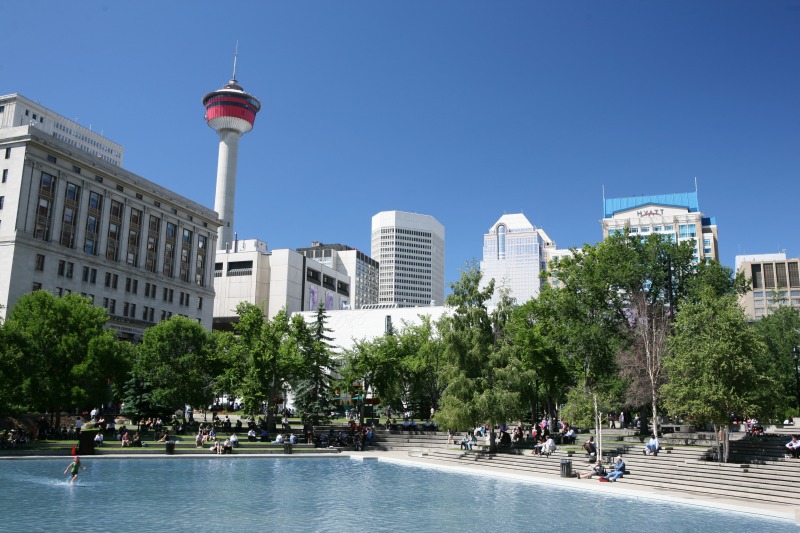 Last, but certainly not least, all visitors to Calgary should at least catch a glimpse of the iconic Scotiabank Saddledome, home to the Calgary Flames (NHL), venue for large concerts and events, and important part of the Calgary Stampede grounds.

As I write this, Calgary is actively exploring the possibility of bidding on the 2026 Winter Olympics! Although widely known as the Vancouver Olympics, events for the 2010 winter games were held in Vancouver, West Vancouver, Richmond and Whistler. Despite financial troubles, protesters, warm weather causing technical troubles and the tragic death of an athlete during a luge training run, the games were widely held to be a success.

Canadian athletes excelled at the 2010 games, more than quintupling their medal count from Calgary. In fact, Canada became the first host nation since 1952 to lead the gold medal count, while also breaking the record for the most gold medals earned by a single country at a Winter Olympics. By the end of the games, Canadian athletes had earned 14 gold, 7 silver and 5 bronze medals, landing at 3rd place (out of 82 nations) in the medal standings!

Fun fact: Vancouver’s games were the first (summer or winter) Olympics to have their opening ceremonies held indoors. The opening and closing ceremonies were both held at BC Place Stadium, following a $150 upgrade.

Visitors to Vancouver that are interested in the Olympics should check out skiing and summer activities Cypress Mountain and go skating, take a fitness class (maybe send the kids to a sports camp?) at the Richmond Olympic Oval or Hillcrest Centre. Take a Skytrain ride on The Canada Line, which connects Richmond and Vancouver International Airport with downtown Vancouver. Vancouver’s eco-friendly Olympic Village, on the shores of False Creek, became residential housing after the games. Want to take a peek? Walk or take a little ferry over from TELUS World of Science or Granville Island and enjoy a wander around the area. In Whistler, Whistler Olympic Park and the Whistler Sliding Centre have become hubs for summer and winter sports of many varieties. Sightseeing visits are also encouraged. If you’re traveling with a sports, cultural or educational group, you can even stay at the Whistler Athletes’ Centre!

We don’t yet know when Canada will again host an Olympic Games, but in the meantime we can all enjoy the memories and the facilities that remain from the Montreal 1976, Calgary 1988 and Vancouver 2010 games. And let’s join together in cheering on our athletes as they take on the world in Rio this August… GO CANADA GO!